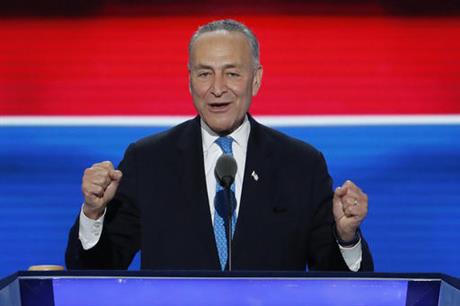 FILE - In this July 26, 2016 file photo, Sen. Chuck Schumer, D-NY., speaks during the second day of the Democratic National Convention in Philadelphia. Senate Democrats are turning to Schumer, a Brooklyn-bred partisan infighter with a pragmatic streak, to steer them into the Donald Trump era. Senate Democrats and Republicans are meeting separately Wednesday, Nov. 16, 2016, to pick their leaders for the Congress that convenes in January 2017. (AP Photo/J. Scott Applewhite, File)
Associated Press

Democrats have a new leadership lineup for next year and the all-Republican government.

New York’s Chuck Schumer will be minority leader, Illinois’ Dick Durbin will be the No. 2 Democrat as minority whip and Washington’s Patty Murray will be the assistant leader.

Schumer told reporters Wednesday that they will work with Donald Trump on issues where they agree but challenge him when values or progress is under assault.

Schumer said that “when you lose an election like this you can’t flinch.”

In other changes, Sen. Patrick Leahy will be the top Democrat on the Appropriations Committee and Sen. Dianne Feinstein will fill that post on Judiciary as the Senate considers a Supreme Court nominee.

Senate Democrats have elected Chuck Schumer to be their new minority leader when Congress convenes in January. The New Yorker will be Washington’s most powerful Democrat as the party confronts an all-Republican government led by Donald Trump.

Democrats unanimously picked Schumer at a closed-door meeting Wednesday. He will succeed Harry Reid, the combative Nevada Democrat who is retiring in January after 30 years in the Senate.

Republicans will control the White House, the House and Senate.

Republicans will have a 52-48 edge in the Senate. Democrats will have some leverage because on important issues, they’ll likely force Republicans to garner 60 votes to end filibusters.

It won’t always be possible for Schumer to keep Senate Democrats together because many will seek re-election in two years from GOP-leaning states.

Senate Republicans have re-elected Kentucky’s Mitch McConnell to be majority leader when the new Congress convenes in January and starts working on Donald Trump’s agenda.

McConnell is widely popular among Republicans and his election was by acclimation on Wednesday. The 74-year-old is considered a clever tactician who mixes conservative leanings with a willingness to cut bipartisan deals when necessary.

McConnell was Senate minority leader for eight years before becoming majority leader when the GOP took control in 2015.

McConnell distanced himself from Trump during the campaign, but says he’s ready to work with him.

Senate Democrats and Republicans are meeting separately to pick their leaders for the Congress that convenes in January. Their selections of Sen. Chuck Schumer of New York and Sen. Mitch McConnell of Kentucky are expected to produce little drama.

That’s the opposite of the House, where both parties’ leadership elections have been more theatrical.