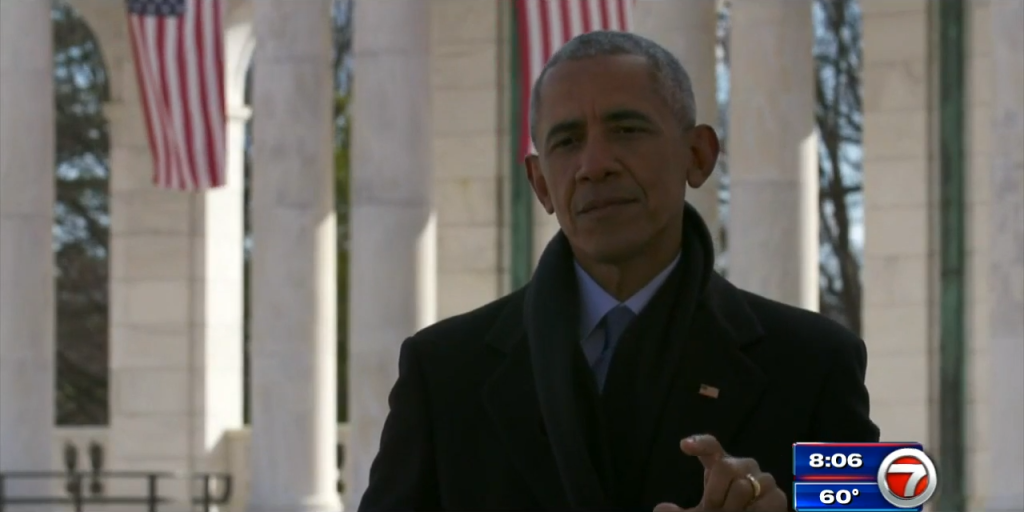 Obama accused Youngkin of portraying himself as a friendly everyman while encouraging what Obama called “lies and conspiracy theories” about widespread voting fraud in the 2020 elections. Former President Donald Trump has continued to push the false narrative about election fraud, which fueled the Jan. 6 insurrection at the U.S. Capitol.

“Either he actually believes in the same conspiracy theories that resulted in a mob, or he doesn’t believe it but he is willing to go along with it, to say or do anything to get elected. And maybe that’s worse … because that says something about character,” Obama said.

Youngkin, a former private equity executive and a first-time candidate, initially made “election integrity” the centerpiece of his campaign and refused for months to say whether President Joe Biden was legitimately elected. He has since said that Biden was, and that there was not widespread fraud in last year’s elections.

Obama described McAuliffe — the state’s governor from 2014-2018 — as an experienced, steady hand and told a crowd of about 2,000 people gathered outdoors at Virginia Commonwealth University in Richmond that the Nov. 2 election would “show the country and the world that we’re not going to indulge in our worst instincts.”

The former president said he understood voters are worn down, both from the country’s divisive politics and the strain of the pandemic. But he said there’s too much at stake to not cast a ballot.

“We don’t have time to be tired. What is required is sustained effort,” he said.

Asked for comment, a Youngkin campaign spokesman called Obama’s remarks “false statements” and accused The Associated Press of “indulging the fantasies of the Terry and the left because they can’t run on their failed record and radical vision for the future.”

The Youngkin campaign has said election security is a bipartisan concern and has tried to draw a comparison between the false claims of fraud today and the 2000 presidential election, when a Supreme Court ruling decided the winner and McAuliffe blasted the decision and said the election had been stolen.

McAuliffe is seeking a return to office in the only state where the incumbent cannot serve consecutive terms. Less than two weeks out from the Nov. 2 election, polls show a tight race in a state Biden carried by 10 percentage points last fall.

While New Jersey is also holding an election for governor on Nov. 2, it’s the Virginia race that’s grabbed national attention as a possible indication of voter sentiment before next year’s midterms.

The officials cast the election as a choice between a proven leader and an extremist who would roll back progressive reforms implemented during the past two years of full Democratic control of state government, including an expansion of voting rights and abortion access, tighter gun laws and criminal justice reforms. Multiple speakers acknowledged the contest is close.

Several speakers sought to tie Youngkin and his running mates to Trump.

“Glenn Youngkin is extreme. This guy is a fanboy for Donald Trump,” said Jaime Harrison, chairman of the Democratic National Committee.

Obama also visited Virginia’s capital to rally Democrats during Northam’s 2017 race for governor against Republican Ed Gillespie, who lost by about 9 percentage points.

His visit marked the latest in a series of appearances by high-profile Democrats who have come to the state in recent days to press the case for McAuliffe’s candidacy. They include voting rights activist Stacey Abrams, Atlanta Mayor Keisha Lance Bottoms and Vice President Kamala Harris, who told a crowd Thursday night, “This race is tight.”

Biden, who campaigned with McAuliffe over the summer, is joining the Democratic nominee in northern Virginia on Tuesday.

National Republican groups criticized McAuliffe on Saturday for the procession of high-profile surrogates.

“As Biden’s poll numbers continue to tank, McAuliffe is going down with him and no amount of heavy hitter politicians will right the ship,” said Maddie Anderson, a spokeswoman for the Republican Governors Association.

Youngkin, who has generally steered clear of outside supporters in the final stretch, was expected to hold a Saturday evening rally in suburban Richmond at the start of a statewide bus tour.

His campaign said in a news release that “instead of surrogates,” the bus tour would feature “everyday Virginians” who will speak about how they think they would benefit from Youngkin’s tax and policy proposals.

Youngkin’s campaign has not responded to questions from The Associated Press about whether Trump has been asked to campaign in Virginia with Youngkin or on his behalf. Trump has endorsed Youngkin multiple times and called into a rally organized by a right-wing radio host this month to exhort the crowd to vote for him.