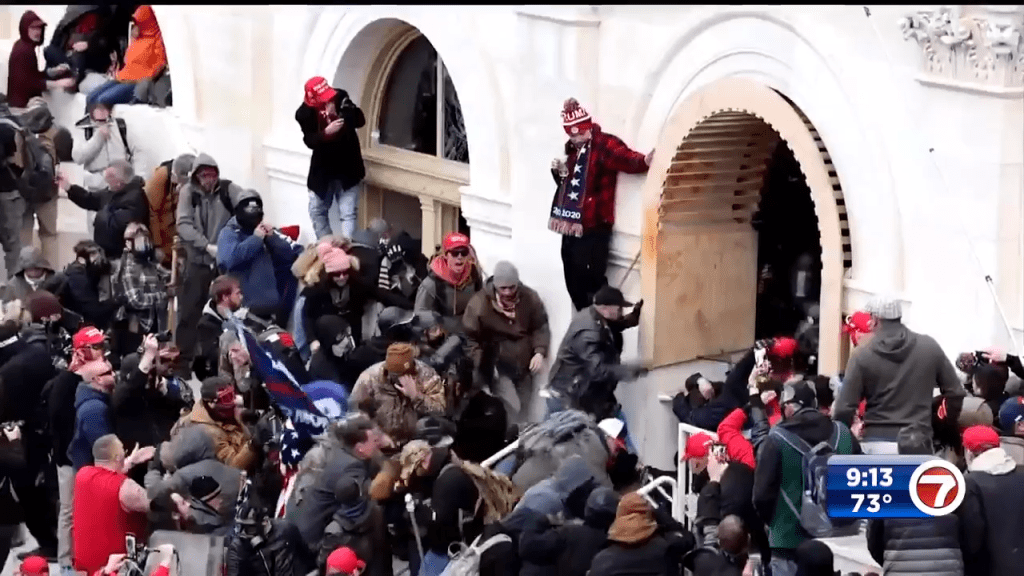 DETROIT (AP) — Ryan Kelley, one of five Republican candidates for Michigan governor and an ardent defender of former President Donald Trump, was charged with misdemeanors Thursday for his role in the 2021 postelection riot at the U.S. Capitol.

His arrest came hours before the House committee investigating the insurrection holds a widely anticipated public hearing, showing never-seen video, audio and an array of evidence highlighting the deadly violence that erupted on Jan. 6, 2021.

It wasn’t clear why authorities decided to move against Kelley now. He has long acknowledged that he was at the insurrection though he didn’t go inside the Capitol. But nearly 18 months later, the government continues to charge more people.

In a court document, federal investigators filed photos of Kelley in a baseball cap worn backward, trying to rally the pro-Trump crowd.

Kelley was recorded on video repeatedly waving to the crowd and directing them toward stairs leading into the building, the FBI said.

He used his phone to “film the crowd assaulting and pushing past U.S. Capitol police officers” and was in a crowd that climbed stairs to a Capitol entrance after causing police to retreat, the document states.

Kelley, a real estate broker who lives in Allendale Township, is accused of disruptive conduct, injuring public property and entering restricted space without permission, according to the criminal complaint.

He is among more than 800 people who are facing criminal charges in connection with the Jan. 6 riot. More than 300 people have pleaded guilty, largely to misdemeanor offenses punishable by no more than one year in prison. Some who’ve pleaded guilty to misdemeanors have been sentenced to short stints behind bars while others have been sentenced to home confinement or probation.

In Michigan, Kelley is one of five candidates on the Aug. 2 Republican primary ballot. The winner will face Democratic Gov. Gretchen Whitmer in the fall.

His arrest further roils a GOP field that initially had 10 candidates. Five of them, including two front-runners, were dropped from the ballot because of forged signatures on their campaign petitions.

Kelley declined to participate in a Republican debate last week because organizers of the public policy conference on Mackinac Island required proof of a COVID-19 vaccination or a negative test.

After the 2020 election, Kelley was a speaker at a “Stop the Steal” rally in Lansing, telling a lie that Trump won the election and that Democrats were trying to steal his victory. During the early months of the pandemic, he organized a protest at the Michigan Capitol, inviting heavily armed militias to gather inside the statehouse.

He has told The Associated Press that militia members are “law abiding, lawful citizens that love this country, and maybe you get a couple of them that are bad apples. Question for you is, are bad apples pretty much in everything that we have as far as groups?”