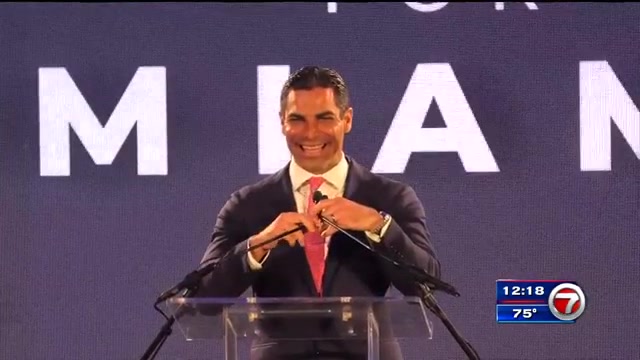 MIAMI (AP) — Miami Mayor Francis Suarez, who elevated his national profile over the past year with a push to transform the city into a tech hub, declared a reelection victory Tuesday after amassing a huge lead over challengers who were not well known.

Suarez, a 44-year-old real estate attorney, built a big lead in the vote count with 79% of the vote and about 85% of precincts reporting, according to the Miami-Dade County supervisor of elections. His nearest challenger, Max Martinez, drew 11% of the votes.

“Today we embark on a new chapter — a journey together to finish what we started, to create the most fair and successful city in our country, to create a model that can be scaled into an agenda for America,” Suarez said in a speech.

The first-term Cuban American politician has been profiled by national magazines, and he raised more than $5 million for the race, far more than he spent on the contest. Suarez, whose father was the city’s first Cuban-born mayor, told the AP he was hoping to replicate the results from 2017, when he won with 86% of the vote.

The Miami mayoral race is nonpartisan, but Suarez is a Republican. He has been critical of former President Donald Trump and has pushed back against the pandemic policies of Florida Gov. Ron DeSantis, including his decision to prevent local communities from instituting mask mandates.

Next year, Suarez is set to become the president of the U.S. Conference of Mayors, gaining a bigger platform for people to meet him in other cities and states. He has not ruled out White House aspirations, saying the pandemic and social media have made “national mayors” stand out more.

Suarez enjoys the name recognition he gets from leading the city of Miami, with a population of 450,000 and a $1.3 billion budget. For comparison, Miami-Dade County, which covers Miami and 33 other municipalities such as Miami Beach, Key Biscayne and Homestead at the edge of the Everglades, has 2.7 million people and a $9 billion budget.

In the past 10 months, Suarez has met with Big Tech players and investors such as PayPal founder Peter Thiel, who bought a house in Miami Beach. Some analysts say Suarez was smart to seize the moment when tech investors were already looking at Florida for tax reasons and its lack of COVID-19 restrictions.

Miami also hosted a Bitcoin conference earlier this year, and started accepting funds generated through a cryptocurrency, named MiamiCoin. Earlier on Tuesday, Suarez said he would take his next paycheck in Bitcoin.

It’s not yet clear how the push has led to migration and job creation patterns as census numbers do not yet include data for 2021.

Raul Marrero, a maintenance worker, went to a polling station Tuesday to vote for the mayor for the second time, after supporting him in 2017.

“I like the ideas and innovation that he is bringing to Miami,” Marrero said. “He is trying to make this into Silicon Valley. And I say, ‘Why not?’”