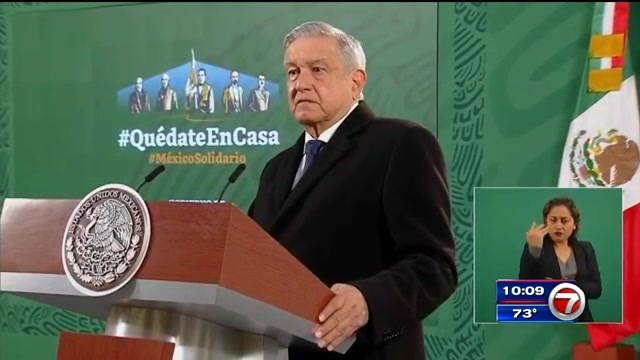 (CNN) — Mexican President Andrés Manuel López Obrador will propose a new migration agreement between the countries of North and Central America this week, he announced on Sunday.

His proposal would ask Central American migrants as well as Mexicans considering emigration to work planting trees and crops across Mexico for three years in return for an eventual six-month US work visa, López Obrador said in a video posted to his YouTube channel. Eventually, participants in the program should be able to apply for US citizenship, he said.

The Mexican President plans to present the plan during Thursday’s virtual Climate Summit, convened by US President Joe Biden.

“You’ll go six months (to the US) and then you will return to your town. And then, three years after having your work visa, with good behavior, you already have the right to apply for your US citizenship,” he added.

The White House and State Department did not immediately respond to a request for comment on the proposal.

Thousands of Central Americans have been driven northward by the economic pain of the pandemic and two devastating Category 4 hurricanes last year. The recent influx of migrants, especially unaccompanied minors, at the US southern border has overwhelmed the American government’s resources in the last month.

Biden’s administration has asked Mexico, Honduras and Guatemala to tighten their borders and stem the flow of migrants, and has also placed around 28,000 radio ads in Latin America to discourage people from making the trip.

According to the Mexican Ministry of Welfare, Sembrando Vida seeks to address rural poverty and environmental degradation by connecting poor families to work on reforestation projects with economic support and other incentives.

“We can plant three million hectares in three years and give up to 1.2-1.3 million jobs to Central American brothers and to Mexicans from Chiapas, Campeche, Veracruz, Oaxaca, Tabasco. This will also allow us to order the migratory flow,” López Obrador said in his video.

The initiative would include the US, Canada, Mexico and the Central American countries, he also said.

The Mexican President is one of 40 world leaders who have been invited to participate in the climate summit.