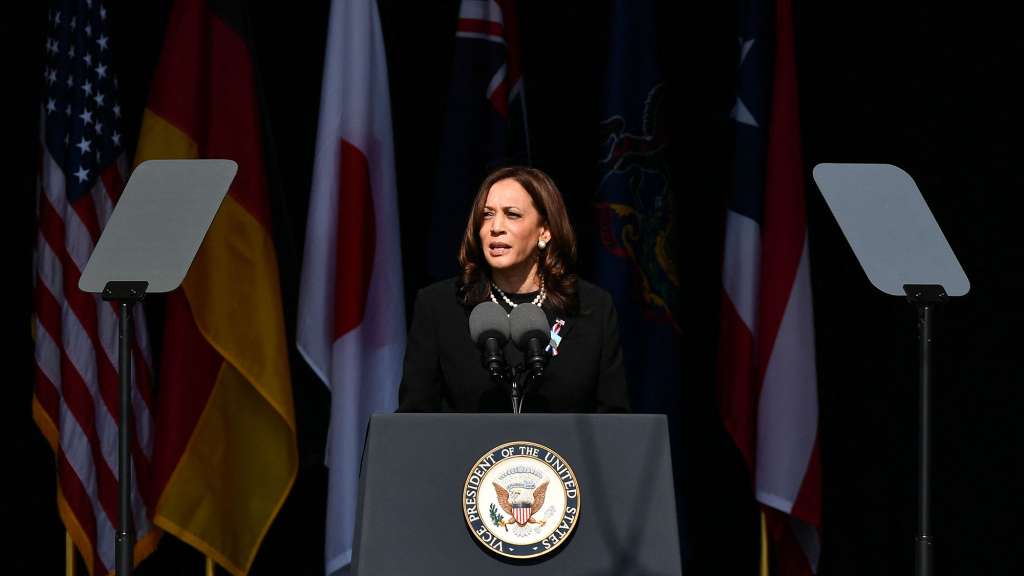 US Vice President Kamala Harris speaks during a 9/11 commemoration at the Flight 93 National Memorial in Shanksville, Pennsylvania on September 11, 2021. - America marked the 20th anniversary of 9/11 Saturday with solemn ceremonies given added poignancy by the recent chaotic withdrawal of troops from Afghanistan and return to power of the Taliban. (Photo by MANDEL NGAN / AFP) (Photo by MANDEL NGAN/AFP via Getty Images)

Niviane Petit Phelps, 39, pleaded guilty on Friday to a six-count indictment, including charges of threats against the vice president. Phelps is scheduled for sentencing on November 19. She faces up to five years in federal prison.

Phelps admitted during a plea hearing in district court in Florida that she sent her husband, who was in prison, a 30-second video of herself threatening to kill Harris in February.

Prosecutors said the videos show Phelps making threats and screaming curse words. She claimed that she had accepted $53,000 to carry out the “hit” against Harris within 50 days, the Justice Department said.

After sending these videos, Phelps sent a photograph of herself holding a firearm with a target sheet at a gun range. Two days later, Phelps applied for a concealed weapon permit, prosecutors said.

Phelps also admitted to telling law enforcement officers who handled this case that if they had not come to her house, she didn’t know what would have happened, according to the Justice Department.

Phelps’ attorney, Scott B. Saul, said in a statement on Tuesday that his client “is adamant that she was just venting as she was going through a tumultuous time in her life and never had an intent to carry out her threats.”

He added that “it has been important for Ms. Phelps to demonstrate her acceptance of responsibility as she begins to atone for her aberrant actions” but that she “plans on demonstrating significant mitigating circumstances” in an attempt to get an “equitable” sentence from the judge handling her case.

CNN has reached out to Harris’ office for comment.