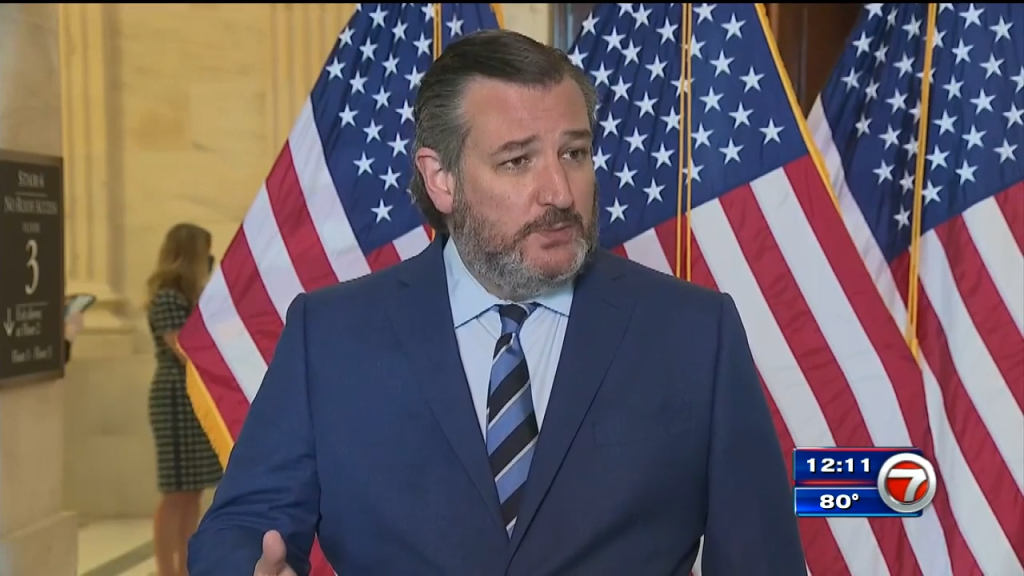 The conservative ideologue and potential 2024 presidential contender appeared on Fox News Channel’s “Tucker Carlson Tonight” show Thursday to apologize for describing the Jan. 6 insurrection as “a violent terrorist attack on the Capitol” a day earlier, the eve of its anniversary.

“The way I phrased things yesterday, it was sloppy and it was frankly dumb,” Cruz told Carlson, a powerful voice in GOP politics whose show is among the most-watched on cable news.

Cruz insisted that he had misspoken, though he has consistently described the riot by Donald Trump supporters as a terrorist attack in interviews and statements over the last year.

But Cruz’s capitulation to outrage from the Republican Party’s far right flank underscores the power it increasingly holds over leading GOP politicians and the influence held by conservative TV hosts like Carlson, who reach millions of viewers every night. And it shows how lawmakers like Cruz, who was once considered one of his party’s most conservative voices, now face pressure from a new guard of hard-liners who swept into power with the backing of Trump’s base.

Cruz has been increasingly open about his interest in mounting another run for the GOP presidential nomination, noting that historically “the runner-up is almost always the next nominee.”

Carlson had used his previous night’s show to excoriate Cruz for his “terrorist” comment. Others piled on.

“Shame on Ted Cruz,” said Rep. Marjorie Taylor Greene of Georgia, a first-term lawmaker and Trump supporter who has peddled numerous conspiracy theories and was recently barred from Twitter for her anti-vaccination comments. She called Cruz’s initial comments “irresponsible” and disrespectful of “MAGA patriots.”

Cruz, along with other Republican Party leaders, had previously described the events of Jan. 6 as “terrorism” without blowback.

“The attack at the Capitol was a despicable act of terrorism and a shocking assault on our democratic system,” Cruz said in a statement released by his office a year ago Friday. “The January 6 terrorist attack on the Capitol was a dark moment in our nation’s history, and I fully support the ongoing law enforcement investigations into anyone involved,” he said May 28.

As recently as December, in an interview with The Associated Press, Cruz said that on Jan. 6, 2021, “we saw a terrorist attack on the Capitol.”

He went on to say “anyone who commits a crime of violence should be prosecuted, and that anyone who violently assaults a police officer should go to jail for a very long time. That’s true whether you’re right wing, left wing or you got no wings whatsoever.”

Republican Senate leader Mitch McConnell has described the attack in similar terms. “American citizens attacked their own government,” he told the Senate after it acquitted Trump in its impeachment trial. “They used terrorism to try to stop a specific piece of domestic business they did not like.”

There is nothing surprising about that characterization. The FBI defines domestic terrorism as “Violent, criminal acts committed by individuals and/or groups to further ideological goals stemming from domestic influences, such as those of a political, religious, social, racial, or environmental nature.” In the Jan. 6 attack, Trump supporters stormed the Capitol in an effort to halt the peaceful transition of power and certification of President Joe Biden’s win.

But many, especially on the right, have resisted attempts to label violence as terrorism, especially when it is committed by white people.

Carlson, who has promoted the racist “Replacement Theory” that elites are trying to replace majority white populations with nonwhite immigrants, pressed Cruz on his characterization of the Capitol assault.

“You called this a terror attack when by no definition was it a terror attack,” he said. “That’s a lie. You told that lie on purpose and I’m wondering why you did.”

Cruz said he had long used the term to describe anyone who attacks police.

“It was a mistake to use the word yesterday because the Democrats and the corporate media have so politicized it,” he said.

Carlson and others have noted that no one in the assault has been charged with “terrorism.” But there is no federal law that provides for an explicit charge of domestic terrorism.

Federal law makes it a crime to give material support to designated foreign terrorist groups, which gives law enforcement agencies the ability to arrest arrest people who donate money or otherwise aid such organizations, even if they haven’t harmed anyone or threatened violence themselves. No comparable law exists for people aligned with U.S.-based extremist groups, which enjoy expansive free speech protections.

Members of two extremist groups, the Proud Boys and Oath Keepers, face the most serious conspiracy charges in the Jan. 6 riot. Individual rioters have been charged with assault and other violent crimes for their attacks on law enforcement. More than 100 police officers were injured, some critically.

Republicans have also taken issue with “insurrection” to describe the events of the day, because none of the rioters so far has been charged with treason or sedition, crimes that would fit with an insurrection attempt.

Those charges are extremely rare. Prosecutors may be reluctant to bring them because of their legal complexity and the difficulty in securing convictions. Overzealousness in applying such charges historically has also discredited their use.