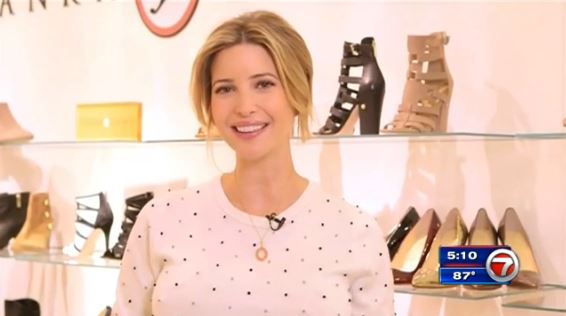 SHANGHAI (AP) — Since her father was elected president of the United States, global sales of Ivanka Trump merchandise have surged and her company has applied for at least nine new trademarks in the Philippines, Puerto Rico, Canada and the U.S. The commercial engine of the first daughter’s brand is stronger than ever even as she builds a new political career from her West Wing office.

Sales hit record levels in 2017, despite boycotts and several stores limiting her merchandise. U.S. imports, almost all from China, shot up an estimated 166 percent last year.

The brand, which Ivanka Trump no longer manages but still owns, says distribution is growing. It has launched new activewear and affordable jewelry lines, and is working to expand its global intellectual property footprint. In addition to applying for the new trademarks, Ivanka Trump Marks LLC has won provisional approval from the Chinese government for four more since the inauguration.

In a statement Tuesday, a spokesperson for the Ivanka Trump brand said the 2017 Chinese trademarks were filed defensively to prevent counterfeiters or squatters from using her name.

Criminal conflict-of-interest law prohibits federal officials, like Trump and her husband, from participating in government matters that could impact their own financial interest or that of their spouses. Some argue that the more her business broadens its scope, the more it threatens to encroach on the ability of two of

President Trump’s most trusted advisers to deliver credible advice on core issues like trade, intellectual property and the value of Chinese currency.

Trump is no longer running the brand, and she has shifted its assets to a family-run trust valued at more than $50 million. In a recent interview with CBS News, she argued that her business would be doing even better if she hadn’t moved to Washington and placed restrictions on her team to ensure that “any growth is done with extreme caution.”

Meanwhile, her husband Jared Kushner has taken steps to distance himself from his sprawling New York real estate business, divesting some of his business interests including his stake in a major Fifth Avenue skyscraper.

The new trademark applications seek the right to put Ivanka Trump’s name on lingerie in the U.S., baby clothes in the Philippines, handbags in Puerto Rico and perfume in Canada, among a host of things. Trademarks can be used to expand a business or defend against copycats. They have ethical implications for public servants because they are granted by foreign governments and can be enormously valuable.

Her brand said in a statement that Trump herself did not sign off on the new applications, adding they are “not necessarily” an indication of planned expansion.

“The brand has filed, updated, and rigorously protected its international trademarks over the past several years in the normal course of business, especially in regions where trademark infringement is rampant,” Abigail Klem, president of the brand, said in a statement. “We have recently seen a surge in trademark filings by unrelated third parties trying to capitalize on the name and it is our responsibility to diligently protect our trademark.”

Ivanka Trump Marks LLC has more than 180 pending and registered trademarks in countries that include China, Japan, Mexico, Turkey, Israel, Canada and Saudi Arabia. In China alone the company has 32 pending trademarks.

In Trump’s administration, Ivanka and her husband have taken on prominent roles as China interlocutors. Norman Eisen, who served as President Barack Obama’s chief White House ethics lawyer, says he would “never have allowed it.”

“Ivanka has so many China ties and conflicts, yet she and Jared appear deeply involved in China contacts and policy,” he said. “For their own sake and the country’s, Ivanka and Jared should consider stepping away from China matters.”

Jamie Gorelick, an attorney for Ivanka Trump, said she and her husband would steer clear of specific areas that could impact her business but are under no legal obligation to step back from huge swaths of policy, like trade with China.

“The ethics rules restrict participation in `particular matters’ that focus on the interests of a discrete and identifiable class,” she said. “Foreign policy toward China is not a particular matter. It affects diverse national interests and every sector of society.”