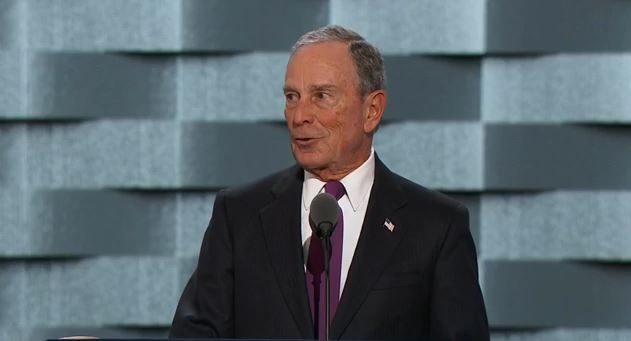 One of the nation’s richest men, Bloomberg drew upon his business background in his unorthodox convention speech in Philadelphia to make the case that a Trump administration would be disastrous for the nation’s economy.

“Trump has left behind a well-documented record of bankruptcies and thousands of lawsuits and angry shareholders and contractors who feel cheated and disillusioned customers who feel ripped off,” said Bloomberg, now an independent. “Trump says he wants to run the nation like he’s running his business? God help us.”

“Truth be told,” said Bloomberg, “the richest thing about Donald Trump is his hypocrisy.”

A three-term mayor who left office in 2013, Bloomberg considered making a third-party run for president this year before opting against a campaign, expressing worry he would siphon away votes from Democratic nominee Hillary Clinton and inadvertently help elect Trump.

Though Bloomberg said that Clinton was “not a flawless candidate,” he praised her work ethic, intelligence and attempts at bipartisanship that made her “the right choice — and the responsible choice — in this election.”

I have no doubt that @HillaryClinton is the right choice. Join me in supporting her – not out of party loyalty, but out of love of country.

While in office, Bloomberg had a cordial relationship with Clinton, who, as a senator from New York, was involved in the city’s post-9/11 rebuilding effort. He did, too, with Trump, whom he knew from New York’s glitzy social circuit and from dealings with him as a developer.

But Trump’s hardline approach to immigration alienated Bloomberg, who often makes the case that an open immigration policy is needed to keep the nation’s economy growing. He deemed Trump’s economic plan “a con” and “a disaster in the making.”

“He would make it harder for small businesses to compete, do great damage to our economy, threaten the retirement savings of millions of Americans, lead to greater debt and more unemployment, erode our influence around the world, and make our communities less safe,” Bloomberg said.

Bloomberg has also become arguably the nation’s leading gun-control advocate, spending millions of his own fortune to finance candidates and groups that call for the restriction of firearms. Trump, meanwhile, has courted the support of the National Rifle Association, a pro-gun lobbying group that frequently criticizes Bloomberg.

Trump did not immediately respond to the speech.

The Clinton campaign believes that Bloomberg’s appearance, scheduled in a prime-time slot, shows the breadth of support for the ex-secretary of state. Clinton aides expressed hope he would sway independent voters and make further appearances on her behalf.

Bloomberg, worth an estimated $47 billion, is the founder of the financial news and information provider Bloomberg LP. He was a political novice when he launched an unlikely bid for mayor in 2001. Largely a social liberal but a fiscal conservative, he served for 12 years, overseeing a gilded age in the nation’s largest city even as the gap between its rich and poor grew.