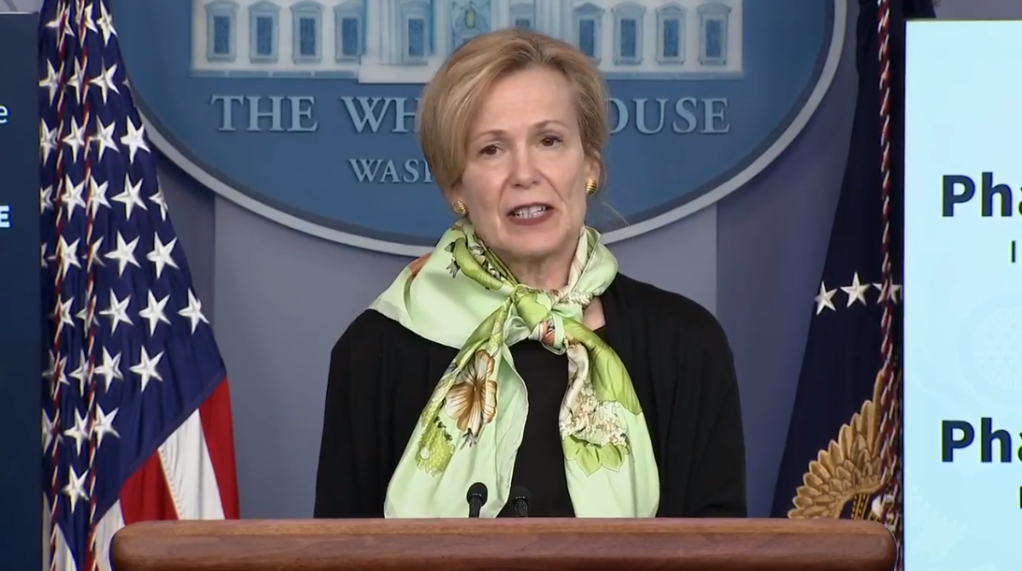 (CNN) — The US may finally be getting a handle on the coronavirus pandemic, but for so many Americans, it’s too late, and that disconnect is raising fresh questions about why the US couldn’t have done more earlier.

Dr. Deborah Birx, who served as the White House coronavirus response coordinator under the Trump administration, reveals her chilling conclusion in a new CNN documentary that the number of coronavirus deaths could have been “decreased substantially” if cities and states across the country had aggressively applied the lessons of the first surge toward mitigation last spring, potentially preventing the surges that followed.

It is a bracing retrospective from one of the top doctors who was tasked with halting the pandemic, and it comes at a time when many grieving families are still trying to understand how one of the wealthiest and most powerful nations in the world was unable to prevent the loss of nearly 550,000 lives.

CNN Chief Medical Correspondent Dr. Sanjay Gupta asked six of the doctors who ran point on the pandemic response, including Birx, to provide their insights on what the US could have done differently in the new documentary, “COVID WAR: The Pandemic Doctors Speak Out,” which airs Sunday at 9 p.m. ET on CNN. The doctors all painfully dissected the country’s missteps that led to the enormous loss of life. But Birx saw it most starkly, stating that the vast majority of America’s deaths could have been prevented, a painful interpretation of the last year for a nation still trying to come to terms with the ongoing loss of life.

In recent weeks, the news has been dominated by positive signs, like the rapidly accelerating pace of vaccinations and the fact that 71% of Americans 65 and older already having received one shot. The nation seems to be breathing a collective sigh of relief that the United States is no longer staggering through the frantic triage mode that characterized most of the last year, even if the data isn’t all trending in the right direction.

While Dr. Anthony Fauci and Dr. Rochelle Walensky, President Joe Biden’s pick to lead the US Centers for Disease Control and Prevention, keep urging Americans to mask up and not to let their guards down — especially given the rise in new variants — the nation has arrived at a calmer moment of introspection, one where there is time to actually reflect on what went wrong.

One area that is drawing new scrutiny is how long it took for former President Donald Trump and his Covid-19 advisers to declare a pause to slow the spread in March 2020 after the initial surge in coronavirus cases began — and how many lives could have been saved if all Americans had really adhered to the restrictions on gatherings and social distancing. In the new documentary, Birx gives Gupta her gut-wrenching answer when asked how much of an impact it would have made if the US had paused earlier and followed through with the safety measures that were proven to slow the spread.

“I look at it this way. The first time we have an excuse,” Birx says. “There were about a hundred thousand deaths that came from that original surge. All of the rest of them, in my mind, could have been mitigated or decreased substantially.”

A key study from Columbia University released last year underscored the devastating conclusion that earlier intervention could have saved tens of thousands of lives. Researchers at Columbia built a model to examine transmission rates between March 15 and May 3, 2020 — and they determined that if the country had shut down two weeks earlier, it could have prevented 84% of deaths at the time.

As the US inches toward normalcy, the best outcome of this moment of reflection is that Americans will continue to take the virus seriously, embracing the role that they can each continue to play in preventing more deaths by wearing masks, avoiding large gatherings and showing up to get vaccinated when it is their turn. There are alarming signs that some people are moving on to the next phase too soon, even though the risks are still high: Miami Beach has struggled to get control of a flood of spring breakers who crowded its streets and air travel is up from a year ago for the first time since the pandemic began.

“I remain deeply concerned about this trajectory. We have seen cases and hospital admissions move from historic declines to stagnations to increases,” Walensky said during the White House Covid-19 task force briefing Friday. “And we know from prior surges that if we don’t control things now, there is a real potential for the epidemic curve to soar again. Please, take this moment very seriously.”

Controversy over the origins of the virus

As the doctors who served in the Trump administration begin to talk more openly about the nation’s missteps, one key piece of the puzzle is understanding the origins of the pandemic — and what could have been done in those early months to halt the spread of Covid-19, which had reached US shores by January 21, 2020.

In another excerpt of the CNN documentary released Friday, Dr. Robert Redfield, the former director of the CDC, expressed fresh skepticism about China’s explanation that the initial Covid-19 cases emerged in a wet market in Wuhan. He told Gupta that he is convinced the pandemic began several months before the US was notified of the “mysterious cluster of pneumonia patients” in late December — raising the specter that the US and the world lost a precious period when they could have begun preparing for the outbreak to mitigate deaths.

Without citing any evidence to back up his claim, Redfield also told Gupta he believes the pandemic originated in a lab in China that was already studying the virus, a controversial theory that the World Health Organization called “extremely unlikely” and for which there is no clear evidence.

“If I was to guess, this virus started transmitting somewhere in September, October in Wuhan,” Redfield told Gupta in a clip from the documentary. “That’s my own feelings. And only opinion. I’m allowed to have opinions now.”

On Friday, White House press secretary Jen Psaki said the Biden administration was reserving judgment on that question until the World Health Organization releases its final report on the origins of Covid-19. Peter Ben Embarek, who headed the organization’s Covid-19 origin investigation, told reporters during a separate briefing on Friday that the report is now complete and will be released to the public within a few days. Investigators visited the lab at the center of the controversy and Embarek told CNN in February that the team had determined the virus was much more widespread in Wuhan than originally thought back in December of 2019.

Fauci, the nation’s top infectious disease expert, seemed to downplay the possibility that Redfield’s explanation is correct during the White House Covid-19 briefing on Friday.

“Obviously, there are a number of theories,” said Fauci, director of the National Institute of Allergy and Infectious Diseases. “Dr. Redfield was mentioning that he was giving an opinion as to a possibility, but again, there are other alternatives — others, that most people hold by.”

While the US waits for those conclusions, the Biden administration announced new steps on Friday to meet the President’s new goal of 200 million shots by his 100th day in office. Jeff Zients, the White House Covid-19 response coordinator, said maintaining the current pace of 2.5 million vaccinations per day for the next five weeks will be the equivalent of vaccinating a sellout crowd at Yankee Stadium 50 times a day.

About 49 million Americans are now fully vaccinated, and about 1 in 3 have received at least one dose. But White House officials are highlighting the fact that 71% of seniors have received one shot, because that age group accounts for roughly 80% of the Covid deaths up to this point.

With the increase in vaccine supply, Zients affirmed Friday there will be enough vaccine doses for every adult in the US by the end of May and said the three manufacturers who have received emergency use authorization for their vaccines in the US — Pfizer, Moderna and Johnson & Johnson — “are setting and hitting targets.”

While increasing the number of available doses at pharmacies and community vaccination sites, the administration announced three new federally run mass vaccination sites on Friday in Boston, Norfolk, Virginia, and Newark, New Jersey. At the President’s urging, Zients also noted that most states and the District of Columbia have now outlined their plans to make all Americans eligible for the vaccine by May 1.

“It’s clear there is a case for optimism, but there is not a case for relaxation,” Zients said. “This is not the time to let down our guard.”