Biden says pope has brought him comfort after son’s death 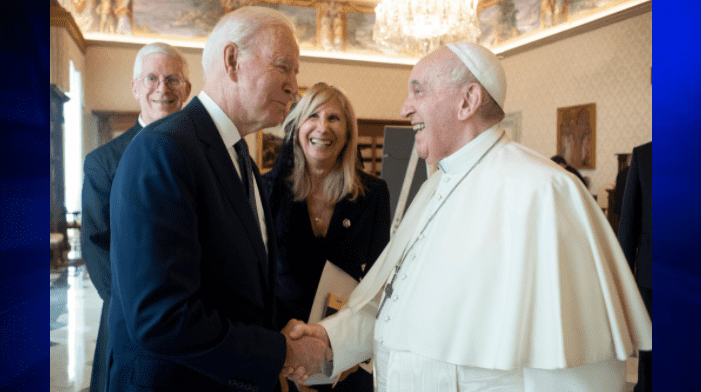 ROME (AP) — President Joe Biden reflected on his relationship with Pope Francis on Sunday as he neared the end of his visit to Rome, saying the pontiff has brought him “great solace” since the death of his son Beau more than six years ago.

Biden was asked about his private meeting Friday with the pope during his closing news conference at the Group of 20 summit. Speaking with emotion, the president harked back to his September 2015 meeting with the pontiff when the leader of the Roman Catholic Church was visiting the United States.

“This is a man who has a great empathy,” Biden said. “He is a man who understands that part of his Christianity is to reach out and forgive. And so I just find my relationship with him one that I personally take great solace in.”

Biden, a practicing Catholic, was vice president at the time of Francis’ visit to the U.S. He was asked by President Barack Obama to accompany Francis as the pontiff traveled to Philadelphia.

Biden said the “wounds were still raw” from the death of Beau, the former Delaware attorney general who had died from brain cancer months before the pope’s U.S. visit.

Before departing Philadelphia, Francis asked to meet privately with Biden and his family. The president, who has previously spoken about the meeting, seemed to choke back tears Sunday as he recalled how much Francis knew about his late son.

“He didn’t just generically talk about him,” Biden said of the meeting, which he said lasted 10 or 15 minutes in a Philadelphia airport hangar. “He knew what a man he was. And it had such a cathartic impact on his children, and my wife, our family, that it meant a great deal.”

Biden said after his meeting with the pope on Friday that Francis told him he should continue to take Holy Communion. Some conservative U.S. church leaders say he should be barred from taking the sacrament because of his support for abortion rights.

The president on Sunday sidestepped questions about the Holy Communion controversy, and instead offered a lengthy answer about the comfort he has gained from his relationship with Francis.

“He is everything I learned about Catholicism from the time I was a kid going from grade school through high school,” Biden said. “I have great respect for people who have other religious views, but he is just a fine, decent, honorable man. We keep in touch.”