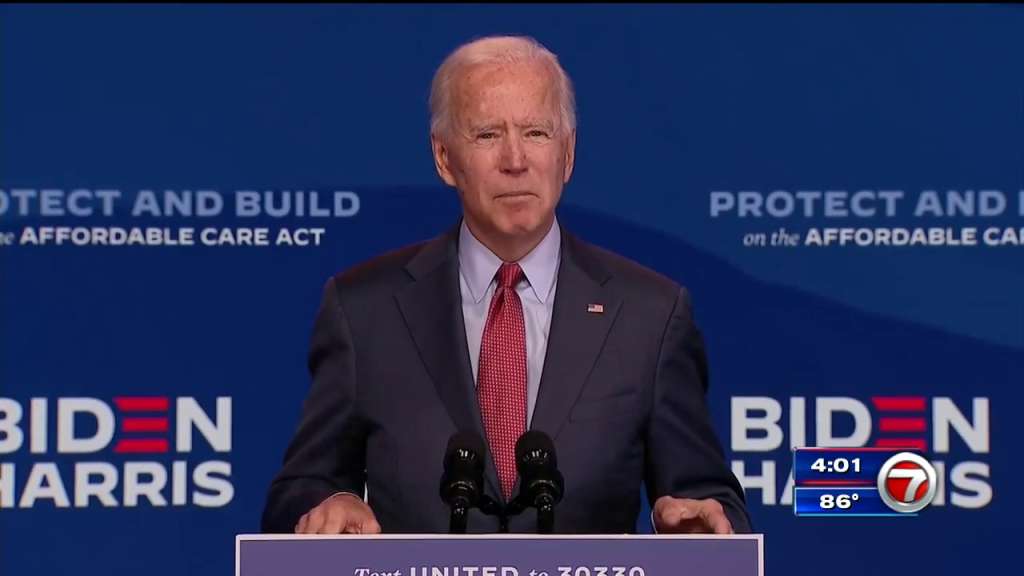 WATERFORD TOWNSHIP, Mich. (AP) — Joe Biden enters the final weekend of the presidential campaign with an intense focus on appealing to Black voters, whose support will be critical in his bid to defeat Donald Trump.

The Democratic nominee was to team up Saturday with his former boss, Barack Obama, for a swing through Michigan. They will hold drive-in rallies in Flint and Detroit, predominantly Black cities where strong turnout will be essential to return this longtime Democratic state to Biden’s column after Trump won here in 2016.

The memories of Trump’s upset win in Michigan and the rest of the upper Midwest are still searing in the minds of many Democrats during this closing stretch. That leaves Biden in the position of holding a consistent lead in the national polls and an advantage in most battlegrounds, including Michigan, yet still facing anxiety that it could all slip away.

Trump, meanwhile, made an aggressive play for nearby Pennsylvania, focusing largely on his white, working-class base. The president had four stops scheduled Saturday in the state, stretching from the far eastern corner close to Philadelphia to the western edge north of Pittsburgh.

Republicans are betting that Trump can win a second term by driving up turnout among his strongest supporters — white, non-college-educated men and rural voters — while limiting Biden’s advantage with Blacks and Latinos. Democrats in several swing states worry that voters of color may not be excited enough about Biden to show up in the numbers they need.

In Michigan, Rep. Dan Kildee, a Democrat who represents the Flint area, said he had been pressing for a couple of months for Biden or Obama to visit Flint, a majority Black city bedeviled by a water crisis that began in 2014 and sickened the city’s residents, exposing stark racial inequities.

“Showing up matters,” Kildee said. “The message is important, no question about it. But there’s a message implicit in showing up, especially in Flint. This is a community that has felt left behind many, many times and overlooked many, many times.”

R&B legend Stevie Wonder was to perform in Detroit after Biden and Obama speak.

Even before he faced Michigan voters on Saturday, Biden’s campaign announced it was dispatching Obama to south Florida and Georgia on Monday.

Obama, the nation’s first Black president, serves as the Biden campaign’s most valuable asset to help energize the non-white voters Democrats so badly need to defeat Trump. While south Florida’s minority population is critical, Obama’s plan to visit Georgia on the eve of the election was particularly notable. It indicates that Biden’s team believes he can become the first Democrat since 1992 to carry Georgia.

The press for Michigan’s Black voters comes after voting was down roughly 15% in Flint and Detroit four years ago — a combined 48,000-plus votes in a state Trump carried by about 10,700 votes. Overall, the Black voter turnout rate declined for the first time in 20 years in a presidential election, falling to 59.6% in 2016 after reaching a record-high 66.6% four years earlier, according to the Pew Research Center.

Some Democrats say the dynamic is different this year. Jonathan Kinloch leads the 13th Congressional District Democratic Party, which includes parts of Detroit, and expressed confidence that Black voters will turn out for Biden.

“This is not 2016,” said Kinloch, who is Black. “People are motivated. People are energized and ready to right the wrong of 2016.”

But Trump isn’t ceding Michigan to Biden. He visited Waterford Township, near Detroit, on Friday and held a rally in the state capital of Lansing earlier in the week.

Before arriving in Pennsylvania, Trump confirmed the recent rescue of an American citizen kidnapped in the West African nation of Niger. The U.S. military rescued the man during an operation in neighboring Nigeria, a U.S. official told The Associated Press on Saturday.

“It was something that had to be done,” the president told reporters. “They were playing with American citizens, and that can’t happen.”

In his Michigan visits, Trump argued that he’s been a better steward of voters’ interests, while pillorying the state’s Democratic governor over restrictions she’s implemented to try to stem the spread of the coronavirus, which has killed more than 229,000 Americans nationally and infected more than 9 million.

“At every turn, Biden twisted the knife into the back of Michigan workers and workers all over the country,” Trump said at his rally Friday in Waterford. “In 2016, Michigan voted to fire this corrupt political establishment, and you elected an outsider as president.”

With the campaign down to the final days, Trump’s closing sprint includes, in addition to the four stops in Pennsylvania, nearly a dozen events in the final 48 hours across states he carried in 2016.

Biden will close out his campaign on Monday in Pennsylvania, the state where he was born and the one he’s visited more than any other. The Biden team announced that the candidate, his wife, Jill, his running mate, Sen. Kamala Harris, and her husband, Doug Emhoff, plan to “fan out across all four corners of the state.”

Biden campaigned in Iowa for the first time since the state’s Democratic caucuses more than eight months ago. Trump easily won the state in 2016, but polls now show a competitive race.

Biden noted as he spoke at a drive-in rally at the Iowa State Fairgrounds that, for the first time since World War II, the iconic state fair had to be canceled because of the pandemic.

He pledged to enact a plan to halt the spread of the virus and told the crowd, to honks from the cars gathered, “unlike Donald Trump, we will not surrender to the virus.”