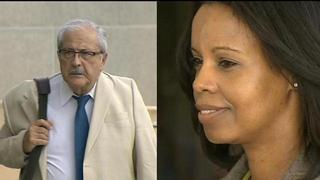 Tom Sclafani: “But to be convicted on the money laundering conspiracy is a little bit shaky.”

The jury had to be sent back after reporting they were deadlocked on several charges for both doctors.

The money laundering charge is the same one other doctors who worked at the same pill mills admitted to and are now in prison.

Tom Sclafani: “And frankly when you look at the verdict form, it was circled not guilty for the money laundering conspiracy. And then it was crossed out and then the jury forman checked the guilty portion.”

Michael Weinstein: “The jury spoke and they said she’s not guilty of causing the deaths of anyone. They found her guilty of one count of multiple counts and that one count is a compromise verdict of money laundering.”

Carmel Cafiero: “The defense had significant hurdles to overcome. Dr. Castronuo reportedly admitted to authorities he knew what he was doing was wrong and did so only for the money. And Dr. Cadet did such a good job she was once named employee of the year.”

And during the trial, Christopher George the owner of the pill mills where the doctors worked, testified that he only hired doctors who would do what he wanted.

George is doing 17 and a half years in prison for running pill mills that took in some $40 million, and sent out millions of pills across the country.

7News first exposed his operation in an investigation that blew the lid off pill mill practices in South Florida.

We documented abuses including in clinic parking lots where addicts were shooting up and snorting pain pills.

But during the trial, physicians who are pain specialists testified for the doctors, justifying their prescribing practices. And clearly the jury believed them. But the doctors are not out of trouble, both face possible prison time for money laundering conspiracy.