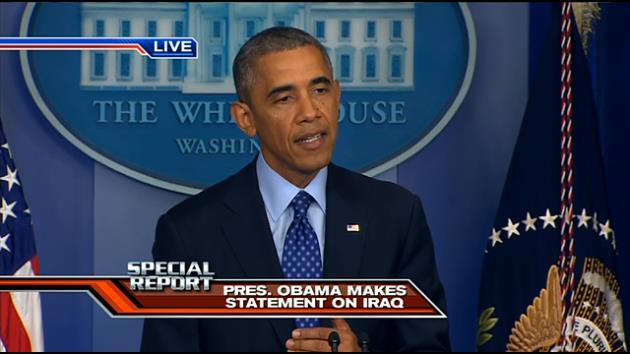 WASHINGTON (AP) — Edging back into a military role in Iraq, President Barack Obama on Thursday said he was dispatching up to 300 military advisers to help quell the rising insurgency in the crumbling state. He called on Iraqi leaders to govern with a more “inclusive agenda” to ensure the country does not descend into civil war.

Though not specifically mentioning airstrikes, an option the U.S. has been considering, Obama said he was leaving open the possibility of “targeted” military action in the future. He said the U.S. also would increase its intelligence efforts in Iraq and create joint operations centers in Baghdad and northern Iraq.

When coupled with previously announced steps, Obama’s actions could put about 600 additional U.S. troops back on the ground in Iraq. The 300 military advisers he announced Thursday would join up to 275 being positioned in and around Iraq to provide security and support for the U.S. Embassy in Baghdad and other American interests.

But he was adamant that U.S. troops would not be returning to combat.

“We do not have the ability to simply solve this problem by sending in tens of thousands of troops and committing the kinds of blood and treasure that has already been expended in Iraq,” Obama told reporters in the White House briefing room. “Ultimately, this is something that is going to have to be solved by Iraqis.”

Sketching a dire situation, Obama called this a moment when “the state of Iraq hangs in the balance.”

He stopped short of calling for Iraqi Prime Minister Nouri al-Maliki to resign, saying “it’s not our job to choose Iraq’s leaders.” But he said those leaders “must rise above their differences and come together” for the sake of their nation.

“Only leaders that can govern with an inclusive agenda are going to be able to truly bring the Iraqi people together and help them through this crisis,” he said.

Offering a hopeful thought, Obama added that as the prospect of civil war heightens, many Iraqis leaders are “stepping back and saying, `let’s not plunge back into the abyss.”‘

Obama spoke after meeting with his national security team to discuss military options and consider how strongly to press al-Maliki to undertake changes and make his government more inclusive. Top U.S. officials believe that giving more credence to Sunni concerns about al-Maliki may offer the best opportunity to stave off another deadly round of sectarian fighting of the kind that engulfed Iraq less than a decade ago.

U.S. officials have been concerned that pushing al-Maliki too hard might stiffen his resolve to stay in office and drive him closer to Iran, which is seeking to keep the Shiite leader in power. However the administration does want to see evidence of a leadership transition plan being put in place in Iraq.

Obama said the U.S, military advisers’ role would be to “assess how we can best train, advise and support Iraqi security forces.”

“American forces will not be returning to combat in Iraq, but we will help Iraqis as they take the fight to terrorists who threaten the Iraqi people in the region and American interests as well,” he said.

Asked later whether the U.S. was opening the door broader military involvement, Obama said: “I think we always have to guard against mission creep. So, let me repeat what I’ve said in the past: American combat troops are not going to be fighting in Iraq again.”

The U.S. withdrew the last American troops from Iraq in late 2011 after more than eight years of war and the loss of more than 4,400 U.S. lives. The withdrawal came after Washington and Baghdad were unable to reach an agreement to extend the U.S. troop presence.

But faced with a growing Sunni insurgency, Iraq’s government has asked the U.S. to launch airstrikes to contain a militant group that seized Mosul, Tikrit and other towns in Iraq as the country’s military melted away.

Obama’s decision-making on airstrikes has been complicated by intelligence gaps that resulted from the U.S. military withdrawal, which left the country largely off-limits to American operatives. Intelligence agencies are now trying to close gaps and identify possible targets that include insurgent encampments, training camps, weapons caches and other stationary supplies.

Beyond airstrikes, the White House has been considering plans to boost Iraq’s intelligence about the militants. Officials have said that additional U.S. forces that could be brought into Iraq to train local security forces could also assist in identifying possible targets for strikes.

Speaking in advance of the president’s announcement, House Democratic leader Nancy Pelosi voiced concern about Obama dispatching even a small contingent of Americans to Iraq.

“I think that you have to be careful sending special forces because that’s a number that has a tendency to grow. And so I’d like to see the context, purpose, timeline and all the rest for anything like that,” Pelosi told reporters at her weekly news conference.

He said Obama must craft a strategy for combating terrorism in the entire Middle East, not just Iraq. He declared, “This is a very serious problem, very serious.”

Boehner, R-Ohio, told reporters that he’s long called on Obama to take more action against terrorism, which he said has “increased exponentially” under this administration.

“You look at this presidency, and you can’t help but get the sense that the wheels are coming off,” Boehner said.

Boehner and Pelosi were among the congressional leaders who met with Obama on Iraq Wednesday.