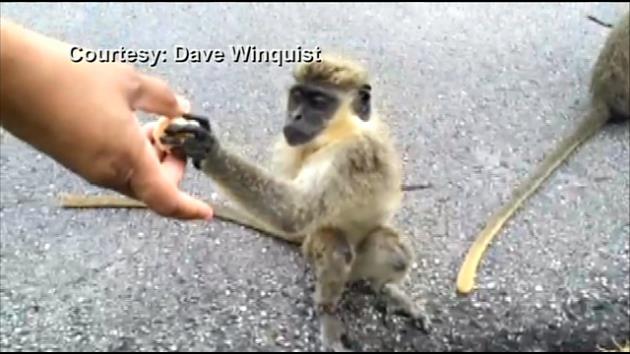 WSVN — There was more than baggage on the tarmac at Fort Lauderdale-Hollywood International Airport in August.

Michael Nonnemacher: "It’s a monkey! Got up on our elevated taxi-way and on to our terminal ramp by Terminal 4."

The monkeys actually live near the airport, and some estimate there are at least 30 of them.

Dave Winquist: "I’ve heard about them from my father. He remembers back in the ’50s, hearing the story of them escaping from a traveling circus, and he’s known about them for years."

They’re called vervet monkeys and people have been feeding them for years.

Dave Winquist sees the monkeys every day at the park-n-go.

Dave Winquist: "They’ve just always been apart of Dania and Fort Lauderdale. Most people like them, take care of them and treat them like their children."

And it’s their friendliness that has scientists intrigued.

Deborah "Missy" Williams: "I was overwhelmed! I just couldn’t believe that there was a monkey walking in the parking lot, and they’re not afraid of people, so they were approaching me."

Deborah "Missy" Williams is getting her Ph.D. in integrative biology. These vervet monkeys are the focus of her research.

Deborah "Missy" Williams: "I’d like to establish a long-term field site, studying these monkeys to allow other students the opportunity to come study a monkey in South Florida."

Her professor, Dr. Kate Detwiler, has traveled to Africa to study these same monkeys.

Kate Detwiler: "Every time I see monkeys here in South Florida, I am just shocked. I feel like I should be back in Tanzania."

They want to know how these monkeys, native to Africa, got to South Florida and how they’ve survived for decades.

Deborah "Missy" Williams: "We speculate that they were brought over from West Africa by the Anthropoid Ape Research Foundation in the late 1940s."

Dr. Detwiler and her students are studying the effect of human interaction. For example, these monkeys have already learned people are a source of food.

And that knowledge is being passed on.

Kate Detwiler: "They keep having babies, so the next generation is inheriting this genetic adaptive kit that allows them to survive there."

The adorable creatures are capturing the attention of other researchers.

Kate Detwiler: "There were a lot of primatologists lined up saying, ‘Call me and let me know if you want help with this.’"

But the monkeys might actually be the ones helping out in the fight for conservation.

Kate Detwiler: "Use these monkeys as ambassadors to tell the story of their cousins over in places where the wildlife space is really disappearing."

Even though it’s hard to resist, Dr. Detwiler and Missy say people should not feed the monkeys because they end up fighting over the food, possibly getting hurt. And Missy tells us contrary to some reports, these vervets do not carry rabies or Herpes B.

You can take part in the research by clicking here.