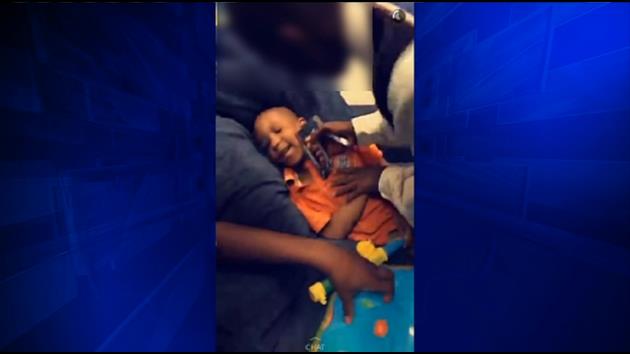 OPA-LOCKA, Fla. (WSVN) — A South Florida mother is demanding answers after she found a photo on social media showing a teenage student holding a staple gun to her 6-year-old son’s cheek at school.

According to the child’s family, a 17-year-old senior at the Grace Academy, a private K-12 school located inside Opa-locka City Hall, pressed a staple gun at kindergarten student Dantrelle Womack’s face while another pupil snapped pictures and posted them on social media.

Tuesday’s incident drew the ire of the boy’s mother, Danielle Ademas. "You want to tell me that this is playing? I ain’t play like that in school," she said.

Ademas said her son could have been seriously injured if the gun had accidentally gone off. "Anything could have happened. It could have poked his eye out, his mouth, his nose. You could have stapled his face," she said.

Dantrelle couldn’t say if small scratches on his face and finger were from that stapler. When asked to comment on the older students, he replied, "They’re so rough."

"It could have been worse than what it was," said Ademas, "and you want to tell me that he was just playing with my child with a staple gun? No."

In an email to 7News, Grace Academy spokesperson Chantale Ferguson wrote, "Grace Academy International does not tolerate or condone on any level horseplay. We are investigating the matter. Also, our staff is continuing our effort to speak with our parents regarding the situation."

Opa-locka Police said they interviewed all of the students, and they do not consider this a case of bullying, just a joke that went too far.

When asked if having a staple gun against his face was fun, Dantrelle said, "No."

Ademas said this is the first bad experience she’s had with the son’s school, but despite the incident, she has not considered taking him out.