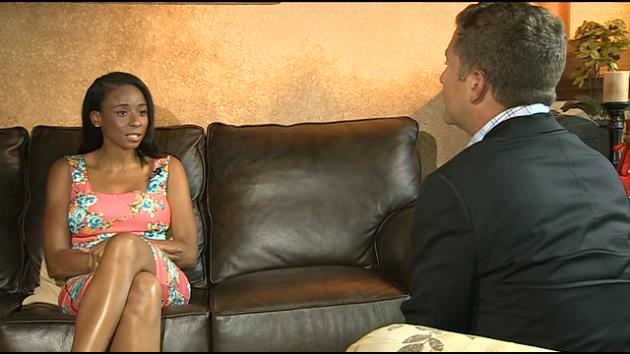 WSVN — Miko Grimes, the wife of Dolphins cornerback Brent Grimes, is opening up about what she calls one of the most frightening experiences of her life, and she says it’s all because of unwanted publicity. Rosh Lowe has the story in tonight’s Lowedown.

Miko Grimes: "Every single day, before he gets put to bed, he asks me if someone was gonna break in the house in the middle of the night."

For Miko Grimes, her world resolves around her 5-year-old son, Aiden, and her husband Brent, a Pro Bowl cornerback for the Miami Dolphins.

Miko Grimes: "I pride myself on my husband not having to worry about anything but focusing on his career because football in the NFL’s a very dangerous sport. And just for one second, if you take your mind off what you’re supposed to be doing, you could die."

In the span of one week in late September, Miko’s world was crashing all around her. The public saw this, Miko yelling and cursing on the ground as she was arrested outside Sun Life stadium. This cell phone video was seen everywhere.

Miko Grimes: "As a child, I’ve always taught him if you are hurt, always look to police to help you, so him seeing police hurting his mother, he was very confused."

She was cuffed for walking in, what cops called, a restricted area. After the arrest, she had to ask a judge for permission to travel to London to see her husband play against the Jets.

Days later, there would be more trauma for Miko and her son. It is a story Miko Grimes has kept private until now, opening up about one of the most frightening experiences of her life.

When she speaks about this, it brings her to tears.

Miko gives us this surveillance video where you can see a group of people walking in their pool area in the middle of the night.

Miko Grimes: "They have instilled in us a fear in our own home."

Miko has always been outspoken. She had her own radio show until she was fired after her arrest. The arrest is now far behind her. The state has dropped all charges, but what is still present is the lasting impact on her family.

Miko Grimes: "You just don’t feel safe anymore in your own home."

If you have any information on this home invasion, call Broward County Crime Stoppers at 954-493-TIPS. Remember, you can always remain anonymous, and you may be eligible for a $3,000 reward.