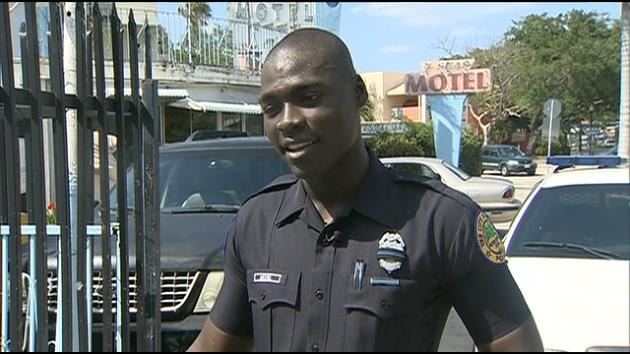 MIAMI (WSVN) — A Miami Police officer went above and beyond the call of duty when he lent a helping hand to a family of four visiting South Florida after he found them sleeping at a bus stop.

Miami Police Officer Ryan Michel said he is accustomed to patrolling Biscayne Boulevard, but he noticed something unusual when he saw a woman sitting at a bus stop on 59th Street, Tuesday night. "Several times throughout the night, I drove up and down Biscayne Boulevard, and I saw her," he said. "It wasn’t until the final time I drove by, at around 5 o’clock in the morning, that I happened to see her with a baby on her lap."

That baby, 2-year-old Joshua, was the reason his mother and two older brothers had traveled to South Florida from Nassau. They said they’d saved up about $3,500 to bring the toddler to Southwest Miami-Dade for surgery.

The family told 7News they were staying at the Seven Seas Motel, but the children’s mother, Ebony Edgecombe, had misplaced the money, and they wound up on the street.

Thankfully for them, Michel drove by in their time of need. "I grew up on the same streets that I patrol in, so I know what it’s like to have friends that have nothing and to have nothing," he said.

Michel, who has been on the force for two years, reached into his own pockets to put them up for a night at the motel while he looked for a shelter, but he couldn’t find one with room for four. "He said he found a shelter for my mother and my little brother to be," said 21-year-old Koby Solomon, one of Joshua’s older brothers. "I really don’t mind sleeping across the road from the shelter."

That wasn’t going to fly with Michel, so when he came back, he chipped in about $500, enough for Joshua and his loved ones to have a roof over their heads through the weekend.

Ebony said she is overwhelmed by the officer’s generous gesture. "There are people who have all the money in the world who wouldn’t do what he did," she said. "He just has the heart of a gem."

Seventeen-year-old Adrian Chase, Ebony’s middle son, echoed that sentiment. "You can see a man’s face, but you can’t see his heart," he said.

"I would hope that, if I was in the same position, anybody who would see what position I’m in, they’d do the same for me," said Michel.

Ebony, who didn’t want to show her face on camera, couldn’t help showing her gratitude. She said Joshua’s scheduled for surgery at Nicklaus Children’s Hospital on the 16th. "Officer Michel spread some love," said Edgecombe. "He did a good thing and guess what? I will never– I will never, ever be ungrateful. I am grateful for Officer Michel, what he did and whatever came behind it. I am very grateful."

The family has to be out of their motel room by Mother’s Day. Michel is enlisting the help of the community, hoping he can find them a place to stay until Joshua is on the road to recovery. "I want to thank him and God bless you," said Ebony.

For Michel, this was all simply a matter of doing the right thing. "I didn’t give them what I had because I had to or because I wanted some type of recognition or praise," he said. "I know what it’s like to have nothing, so I’m just trying to help someone in need."

Michel’s sergeant has set up a GoFundMe page for the family. If you would like to make a donation, go to www.gofundme.com/edgecombe.