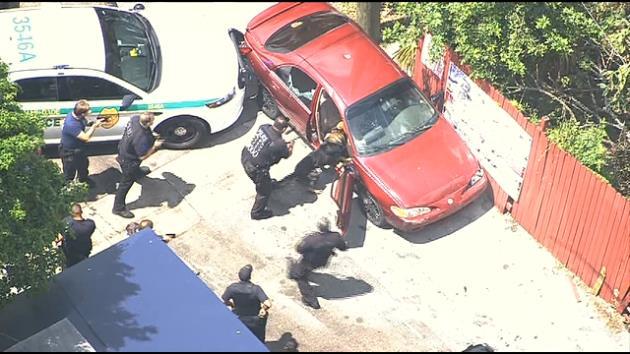 NORTHWEST MIAMI-DADE, Fla. (WSVN) — City of Miami Police and Miami-Dade Police detained a man with the help of K-9s after a dangerous high-speed chase in a residential area of Northwest Miami-Dade, Friday afternoon.

The chase ended on Northwest 119th Street and 11th Avenue after K-9 units helped subdue the man, at around 1:45 p.m.

The driver, who fled police, surrendered only after crashing into a dumpster and then reversing the car, ramming it into a Miami-Dade Police cruiser. Two police K-9 officers had to drag the man out of the red Mercury Grand Marquis from the passenger side of the car after that final crash.

The chase reportedly began in Downtown Miami and continued north through residential streets before it came to its conclusion outside El Conuquito Restaurant.

Several officers reported minor injuries but are being applauded by witnesses and their departments for their great restraint. "The Miami-Dade Police Department, as well as the City of Miami, did an outstanding job," said Javier Ortiz, of Miami’s Fraternal Order of Police.

Their decision to show restraint was crucial, because right behind them was a crowd of people dining outside during lunch hour. Patricia Martinez was grabbing lunch at the restaurant with her 6-month-old baby when the chaos ensued outside. "That guy’s crazy," she said. "That was dangerous."

Jesus Campesino was also having lunch when he heard the commotion. "Oh, yes, we ran away," he said. "I ran inside the bathroom because that’s the safest place I could think about!"

Ortiz added, "They used incredible restraint, ’cause when that subject put that car in reverse, they could have easily shot him. You know, they took into consideration that right behind them was a restaurant with people dining. You know, those are those split-second decisions that we need to make as police officers."

An officer was treated on the scene for minor scrapes around his legs, and one of the K-9s were treated as well.

The suspect was arrested and charged with attempted murder. His girlfriend remains at the hospital recovering from her injuries