MIAMI LAKES, FLA. (WSVN) - A South Florida woman turned herself in to authorities, one week after an employee at a Victoria’s Secret in Miami Lakes was attacked by five women inside the store.

Surveillance video caught the moment five women ambushed the employee at the store, located at 6800 Main St., on May 17.

Jantanice Walker, 23, is accused of being part of the group involved in the incident. “We’re just coming in to turn her in,” said attorney Dustin Tishcler. “She realizes that there’s a warrant for her arrest, and she’s voluntarily coming in to surrender.”

Police said, when one of the women involved in the incident was walking toward the exit, the sales associate offered to hold the merchandise for her. Surveillance cameras captured a woman grabbing the employee’s hair. Then, the footage shows several other women joining in, hitting and punching the employee in the face.

Officials said they released the video in hopes of catching the suspects.

Walker’s attorney exclusively told 7News that his client has a warrant out for her arrest and is voluntarily turning herself in. 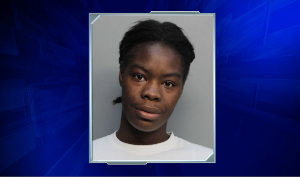 “I’m ready to get it over with,” Walker told 7News.

“My daughter, she’s a good person, good mother, she’ll give the shirt off her back,” said Barbara Strong, the suspect’s mother. “She’s not one to get out there and do wrong. She comes from a good background.”

Walker’s attorney, Dustin Tishcler, said she is innocent and that there are two sides to every story. “Well, some friends went shopping at Victoria’s Secret. My client was in the back shopping when a fight broke out in the front,” he said. “She did not take any clothing with her. She went to go see what was happening and got herself involved in the fight as well, but she did not attempt to steal anything during that fight. She did not leave the store with anything during that fight. She was simply protecting her friend who was fighting with someone who she didn’t know.”

When asked why she’s turning herself in, Walker said, “I felt it’s the right thing to do.”

A security guard has since been on patrol inside the store for safety measures.

Strong said she saw the video. However, she is standing by her daughter. “I know my daughter is innocent, and I know that she wouldn’t go out there and steal anybody’s things,” she said.

Walker has been charged with battery and strong-armed robbery. She remains at thTurner Guilford Knight Correctional Center. Her bond was set at $9,000.

Miami-Dade Police continue to investigate and identify the rest of the women involved. If you recognize any of them, call Miami-Dade Crime Stoppers at 305-471-TIPS. Remember, you can always remain anonymous, and you may be eligible for a $1,000 reward.