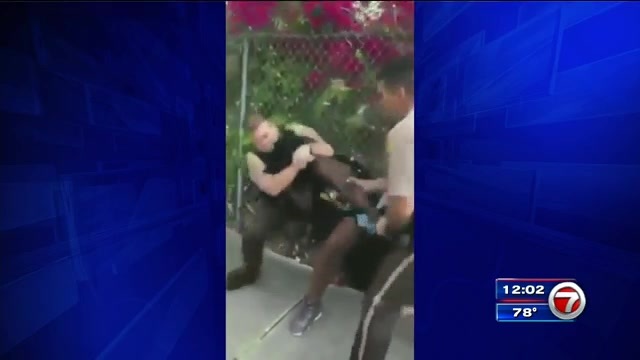 SOUTHWEST MIAMI-DADE, FLA. (WSVN) - A woman said she feared for her life when a police officer used force to arrest her in Southwest Miami-Dade, an incident documented in a viral video that has led the officer to be placed on desk duty.

In the video, which has prompted an investigation, Miami-Dade Police officers could be seen taking 26-year-old Dyma Loving down to the ground and placing her in handcuffs.

A friend of Loving, Adrianna Green, is heard questioning the officer’s actions.

“What the — why are you doing this?” Green is heard screaming in the video.

“She needs to be corrected if anything,” the officer replied as he and three other officers wrestle Loving to the ground and handcuff her.

“She’s not doing nothing,” Green is heard saying.

Police released body camera footage of the incident on Friday morning, providing a different angle of what took place.

Loving said she thought her life was in danger.

Loving said this all began after a man called her a derogatory name as she and Green were walking past his home in the area of Southwest 201st Street and 113th Place, March 5.

Loving said the man then pointed a gun at them.

But when police arrived, Loving was the one who ended up in cuffs after, officials said, things escalated.

The police report said Loving was “acting belligerent and would not obey commands.”

Loving said she was just shaken up and wanted to charge her phone so she could call her children.

“[I told police], ‘My life was just threatened. I’m frantic right now. I just want to speak to my babies,'” she said.

“He assaulted her. He put his hands on her,” said Green.

“What do you not understand? I got a gun pointed in front of me,” Loving is heard screaming in the video.

Loving admitted she was upset and yelling but said she did not do anything to deserve the officers’ treatment.

“I didn’t threaten you. I didn’t physically assault you, I didn’t you anything to you,” she said.

Loving, a mother of three, said the takedown left was left with bruises and scrapes.

“From the moment [the officer] walked up and choked me. He choked me out,” she said. “I had to go to the hospital. I thought my bones in my neck were broken. I couldn’t even talk for three days.”

Users on Twitter tagged MDPD Director Juan Perez, as well as the department’s account after watching the video.

“I am aware of the concerning video circulating on social media involving our department,” Perez wrote on Twitter. “I find the actions depicted on the video deeply troubling and in no way reflective of our core values of integrity, respect, service, and fairness.”

An investigation into the entire incident is currently ongoing and upon its conclusion, I will hold those that violated any of our policies and/or procedures accountable for their actions or lack thereof.

Perez said an officer has been placed on desk duty and removed from his position as a field training officer as a result of the video.

The director hinted that more disciplinary action could be coming.

Frank Tumm, the man who allegedly pulled a gun, prompting a police response in the first place, said he did no such thing.

“If I had a gun, I would have been arrested,” he said.

“She wasn’t very pleasant with the cops,” he said.

Loving was charged with disorderly conduct and resisting arrest without violence.

Miami-Dade Police officials on Friday morning said that as a result of further investigation Tumm was arrested and charged with two counts of aggravated assault with a firearm.

“All of that, it shouldn’t have happened. You don’t treat a victim like that,” Loving said.

Loving spent one night in jail. She said she was told the charges against her would eventually be dropped.