HIALEAH, FLA. (WSVN) - A woman has died following a shooting in Hialeah, and her family said her husband is the suspect in the murder.

Hialeah Police were dispatched to a residence in the area of East 40th Street and Seventh Avenue, at around 7 a.m., Friday.

When officers arrived, they found a 40-year-old woman’s body, who had been struck with several bullets.

“I’ve never seen something like that happen here in this neighborhood, so it’s very sad,” said next-door neighbor Bryan Lopez.

Lopez said he heard gunshots but didn’t see much when he looked outside his window.

“All I know is that it was six shots in the morning,” he said.

Police have not released the victim’s identity, but her brother has identified her as Jozory Carida Espinosa.

Detectives identified the suspect as Joel Luis Polanco and said he fled in a dark gray 2018 Toyota Camry sedan.

Neighbors said the victim was staying with her parents.

Espinosa’s family said she had been married to Polanco for 15 years. They have two children, and the shooting stemmed over their divorce.

Family members said the children were inside the home at the time of the shooting.

Investigators surrounded the scene with crime scene tape as they canvassed the area.

A block from the home, Ariadna Aztarain, director of the Mission of God Academy day care, said she was concerned for her children’s safety.

“We started seeing a lot of police activity. We tried to make sure that everybody stayed in a classroom in a corner, no going out to the bathroom,” she said. “I felt bad. Some of them needed to go, but I would not let them out.”

According to police, Polanco is considered armed and dangerous and should not be approached. He is wanted for first-degree murder. 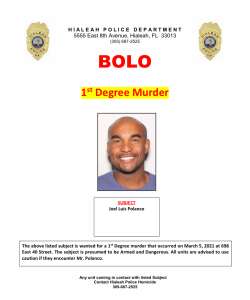 As police continue their search for Polanco, neighbors said they will pray for the Espinosa’s family.

“I have no clue what to say, but my prayers are with the family,” said area resident Arlin Rodriguez.

“Praying, and hopefully everything gets solved. I hope they catch him,” said Silver.

Espinosa’s body has since been removed from the residence and taken away from the scene.

If you have any information on this fatal shooting or Polanco’s whereabouts, call Miami-Dade Crime Stoppers at 305-471-TIPS. Remember, you can always remain anonymous, and you may be eligible for a $3,000 reward.