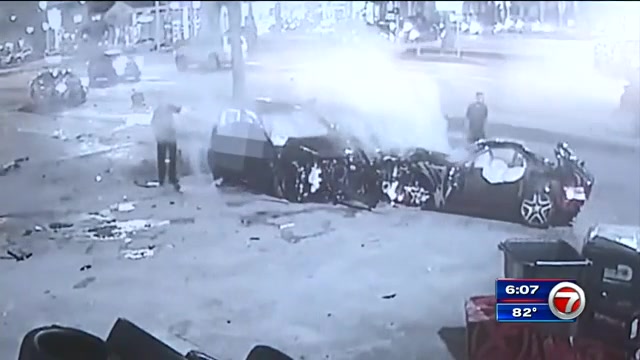 NORTHWEST MIAMI-DADE, FLA. (WSVN) - Police are investigating a chain of events in Northwest Miami-Dade that began with a police pursuit of a stolen car and ended with a woman killed, a man taken to the hospital, and a man and a woman in custody.

Surveillance video captured the violent collision at the intersection of Opa-Locka Boulevard and Northwest Seventh Avenue, just after 8:35 p.m., Friday.

The footage shows both vehicles rolling until they come to rest in front of a tire shop.

Miami-Dade Police and Fire Rescue units responded to the scene shortly after.

According to police, detectives in an unmarked police cruiser observed a stolen Mercedes-Benz. When they turned on their emergency equipment, the driver of the Mercedes-Benz did not stop and officers pursued.

The stolen vehicle then crashed into an innocent driver’s dark-colored vehicle at the intersection. The force of the impact sent some car parts, including a suspension, into the middle of the roadway.

People who work in the area said they heard the impact and ran toward the wreck without hesitation.

One of those good Samaritans was Oratio Garrell, who owns the restaurant King Jerk, located feet away from the intersection.

“I just heard a sound, and I looked up. I see the cars rolling down the street,” he said. “I didn’t see the impact, and I instantly see the cop car right behind them, so I figured it was a bad accident.”

Garrell said he then sprang into action.

“I went into the back, and my wife told me to bring the extinguishers out, realized the cars were on fire, so I put the cars out,” he said.

Surveillance video captured Garrell extinguishing the flames on the Mercedes.

“It didn’t explode, it just ignited,” he said.

Fire rescue crews pronounced the female passenger of the dark-colored vehicle dead at the scene.

“That was a tragic situation, ’cause they were running from the cops and hit the wrong car, so it’s just a sad situation,” said Garrell.

Surveillance video shows good Samaritans and police officers trying to help the drivers and passengers in both cars.

Paramedics transported the driver of the vehicle where Gutierrez was killed to an area hospital in unknown condition.

The two subjects in the stolen car were apprehended on the scene, and then they were transported to an area hospital for injuries they suffered during the crash.

Officers shut down several roadways in the area while they investigated.

Homicide detectives have not disclosed the identities of the four people involved. They did not immediately reply to 7News’ calls for more information.