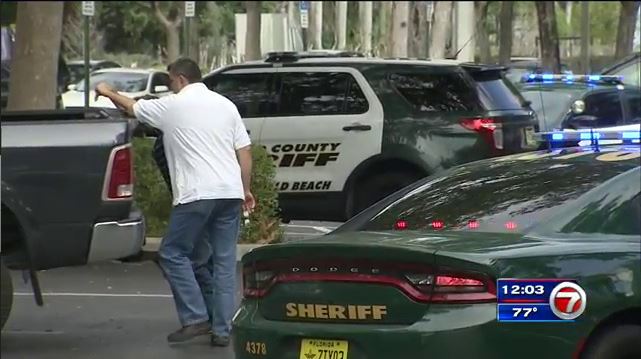 DEERFIELD BEACH, FLA. (WSVN) - An investigation is underway at a Deerfield Beach construction site after witnesses said a worker was hacked to death by his crowbar-wielding co-worker.

Thirty-two-year-old Jonathan Schuler and 32-year-old Arcenio Alvarez, who worked for different companies, were part of a crew renovating a building near 700 W. Hillsboro Blvd., Wednesday.

Suddenly, at around 9 a.m., Schuler grabbed a crowbar, and struck Alvarez twice over the head, splitting open his head, according to the Broward Sheriff’s Office. Then, he fled the scene, witnesses said, and jumped through a trash shoot. That’s when fellow construction workers who witnessed the horrific scene ran after the subject and subdued him until Broward Sheriff’s Office deputies arrived to the scene.

“Suddenly, he grabbed a crowbar and hit the man mover the head twice, splitting his head open,” Jose Valentin Flores, a witness, said.

Another witness, Orin Scott, said the construction workers chased Schuler with crowbars and an ax.

“There were three men altogether, two with a crowbar, one with an ax, that were chasing someone right in this area right here,” Scott said. “You can’t go anywhere without things happening now. Things are bad.”

Flores said Schuler attacked for no reason, and that he thinks he was on drugs. However, these witness accounts have yet to be confirmed, explained BSO.

“It doesn’t appear that there was a fight between the two men, but this is something that the detectives are gonna, obviously, be trying to determine,” said BSO spokesperson Gina Carter. “What prompted the attack? Why did this even happen?”

Officials said Schuler was taken to the hospital after suffering from elevated blood pressure. He will undergo a toxicology test.

In 2006, he was arrested for possession of cocaine and MDMA with the intent to sell.

The victim worked for a subcontractor that hired day laborers. Workers said he hadn’t been on the job for too long before the tragedy.

“It’s also unclear if these two men knew each other,” Carter said. “Right now, detectives are speaking to everyone involved, trying to piece together different information to determine why the attack took place.”

The victim leaves behind his 3-year-old son and a wife.

BSO said Schuler will likely be charged with murder.

If you have any information on this investigation, call Broward County Crime Stoppers at 954-493-TIPS. Remember, you can always remain anonymous, and you may be eligible for a $3,000 reward.