WEST MIAMI, Fla. (WSVN) — A business owner has been arrested after, police said, millions of dollars worth of counterfeit merchandise was found in his West Miami store, Wednesday.

According to investigators, Ulisis Valencia was selling counterfeit designer brand clothing and jewelry from a showroom at the back of his business, located at 6460 SW 8th St.

A tip led police to the business.

Undercover officers entered the store pretending to be customers and found upwards of $10 million worth of counterfeit designer clothing and jewelry in a back showroom, officials said.

“They went to investigate, and actually, Mr. Valencia tried to flee the scene, and he was apprehended a short time later on property by other detectives,” said Miami-Dade Police Detective Lee Cowart.

Valencia was arrested at the store on Jan. 18. 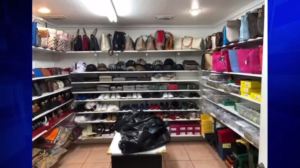 “When the staff was walking the dogs, they saw a lot of police cars, policemen, and they were pulling out big black bags with stuff inside of it,” said Marta Lista, who owns an animal hospital nearby. “That’s all we saw.”

Lista was shocked to know a business just two doors down from hers was selling millions of dollars worth of fake merchandise.

“We walk the dogs all the time back there and have never seen anything going on there,” said Lista. “We never saw a lot of activity coming in and out of there, and we’re the business next door and never imagined that was going on there.”

An audit and inventory of the impounded merchandise revealed the retail value to be in excess of $9.6 million.

If you have any information on this counterfeit operation, call Miami-Dade Crime Stoppers at 305-471-TIPS. Remember, you can always remain anonymous, and you may be eligible for a $1,000 reward.