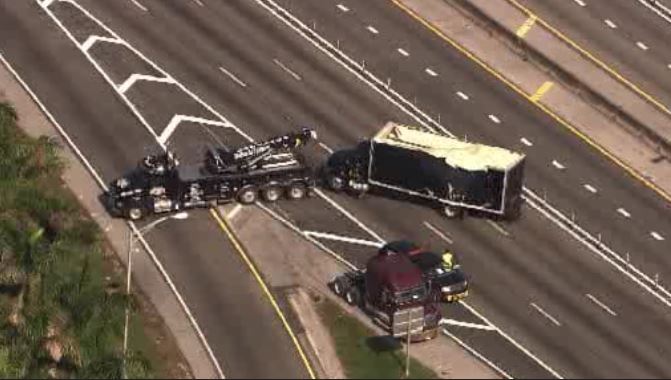 NORTH MIAMI-DADE, Fla. (WSVN) – Crews have cleared the scene of a three-car collision on Interstate 95, near the Miami-Dade/Broward County line, Wednesday afternoon.

According to a Florida Highway Patrol spokesperson, a van and two trucks crashed at 12:15 p.m., along the southbound lanes north of the Miami Gardens Drive exit.

The driver of the white van decided to exit the express lanes, but in the process, cut off the box truck. In an attempt to not hit the van, the truck swerved, lost control and went over the guard rail and down an embankment, officials said.

The tractor trailer ended up hitting the van in the process.

Miami-Dade Fire Rescue responded to the scene of the crash. There were no injures or transports involved in this accident.

The southbound lane was closed for several hours but has since reopened.