MIAMI (WSVN) - A giant naked Trump statue quietly sprung up on top of a billboard at Mana Wynwood overnight before being taken down and moved to another location in the neighborhood, Wednesday night.

The statue was originally located atop an abandoned RC Cola plant-turned event space, right in the heart of the Wynwood Arts District. It was eventually removed when, organizers said, police told them it could distract drivers on Interstate 95. But late Wednesday night, the statue was back up in Wynwood, overlooking Second Avenue.

According to Miami New Times, the Naked Trump is the brainchild of INDECLINE, an anonymous anarchist collective that has placed “Naked Trump” statues across the U.S. They have appeared in New York City, Seattle, San Francisco, Los Angeles, Cleveland and Miami. 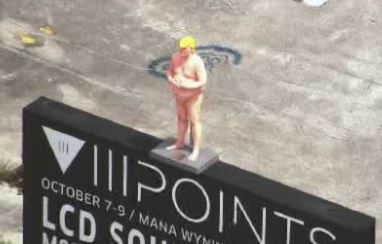 The collective has titled the works, “The Emperor Has No Balls,” which makes quite a clear political statement.

Parts of the statue are rather small, such as the hands, a reference to U.S. Sen. Marco Rubio’s comments during a primary rally.

“Look at those hands. Are they small hands? And he referred to my hands,” Trump said during a debate in response to Rubio’s comments. “If they’re small, something else must be small. I guarantee you, there’s no problem. I guarantee,” Trump said.

“I think it’s exactly like him,” said another onlooker in Wynwood.

Organizers said the statue will stay up in Wynwood as long as possible.