Ronald Walker and his family are heartbroken after the loss of their beloved mixed breed dog, Rusty. “I still see that picture in my mind of what my dog had to go through, and I couldn’t help him,” Walker said.

Walker was a witness to Rusty’s attack. It happened Tuesday morning on Jamaica Drive in Cutler Bay. Walker said he knew something was wrong when he heard his wife screaming. “Oh, my Lord. You should see the screams, the crying and the tears of them killing my dog,” he said in tears.

Surveillance video captured the gruesome attack. The pack of dogs can be seen jumping the fence and attacking Rusty. “You couldn’t get the dogs off of my dog,” he said. “They were just too many and too brutal.”

Walker’s neighbor, Christina Blanco, tried to help when she heard the screams. “The neighbor saw that Mr. Walker was by himself, so he came with the hose and a stick,” Blanco said. “He didn’t want to let go.”

Rusty was brought inside and rushed to the hospital, but unfortunately, the next morning, Rusty had passed away. “He was bleeding so badly,” Walker said. “He was punctured deeply in the neck.” 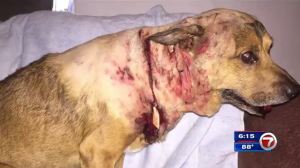 According to a Miami-Dade Offense Incident Report, the dogs seen in the video belong to a man named David Harris. Harris lives a block away from where the attack took place.

Harris told 7News that his dogs escaped because they got scared by lightning. He also said he never had a problem with his American Bulldogs before. However, according to a police report, “[It] was approximately the third or fourth time that (an officer) responded to the area in reference to his dogs.”

Walker and his wife, Joanne, are now left to grieve Rusty and are hopeful that something will be done so no one else gets hurt. “He was such a loving dog,” Walker said. “He never made any threats against anybody, and I’ll miss him terribly.”

Harris was fined almost $2,000. Animal Services determined his dogs are terrier mixed breeds, so they are allowed in the county. A dangerous dog investigation is now open.