MIAMI GARDENS, FLA. (WSVN) - Troopers have reopened all southbound lanes of the Florida Turnpike in Miami Gardens, one day after, authorities said, two sinkholes opened up on the roadway.

According to the Florida Highway Patrol, a water main broke, Saturday afternoon, causing a sinkhole to open up in the far right lane, just north of the Northwest 199th Street exit. Some time later, they said, a second part of the road began to sink several feet from the first sinkhole.

A 7News viewer sent in cellphone video showing the Turnpike turning into a parking lot as traffic came to a standstill. Hundreds of drivers were trapped for hours on the freeway.

“The road gave way right by Joe Robbie Stadium,” said Dominic Patterson, one of the stranded motorists. “I’ve been sitting in the truck. I’ve been here for hours.” 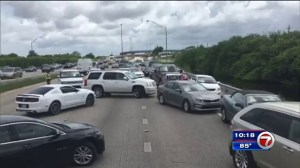 Florida Highway Patrol Trooper Joe Sanchez said the swift actions of a trooper who drove by and decided to close the freeway likely prevented an accident. “Something bad could have come of this but, you know, due to the action of the trooper and the decision that they made to close off the road as quickly as possible, no one was hurt,” he said.

7News cameras captured the sinkholes after troopers cleared the road and waited for engineers to arrive. Inspectors investigated the damage, which kept the road closed until Sunday morning.

Sanchez said the trooper’s actions probably saved lives. “Can you imagine a car doing 70 miles an hour running into this?” he said. “I mean, you’re talking about severe damage and possibly even death.”

Southbound traffic on the Turnpike was diverted on to the Homestead Extension while crews assessed the damage. 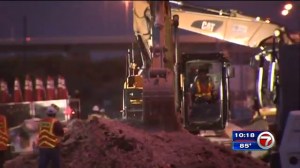 Crews then worked into the night to repair the broken water main. The southbound lanes were reopened to traffic on Sunday, at around 10 a.m.