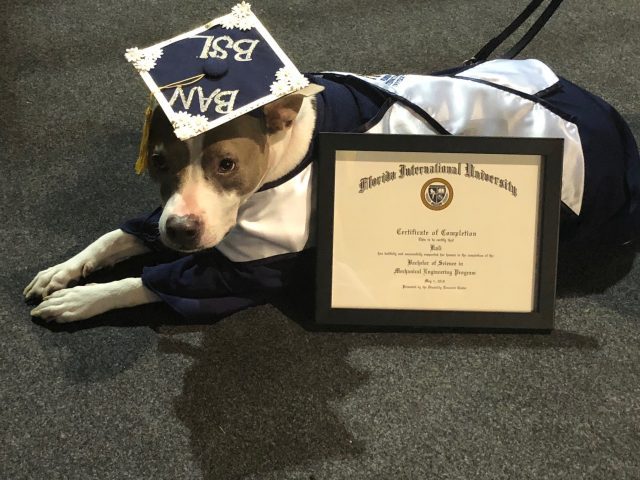 WEST MIAMI-DADE, FLA. (WSVN) - History was made during a Florida International University graduation ceremony when a service dog received a certificate of completion.

According to FIU News, 7-year-old pitbull Kali was the first service dog to be recognized by FIU’s Disability Resource Center. Kali walked across the stage with her owner, Tiffany Ascanio.

The award was created for service animals who met federal guidelines and attended all of the student’s classes, FIU News reported.

“We are really thrilled that Tiffany has been able to bring this narrative to life for our FIU community to embrace and celebrate,” said Amanda Niguidula, director for the Disability Resource Center.

Ascanio got Kali certified as her service animal so the canine could help her cope with an ongoing medical condition. Kali is protected by the American Disabilities Act against laws for specific breeds in Miami, which allowed the pitbull to aid Ascanio.

“I don’t think it’s for everyone, and I don’t think it should be abused,” Ascanio said to FIU News. “But if people are willing to put in that dedication, it can give them a lot of freedom that they might not necessarily have in their life right now.”

Ascanio also said Kali is incredibly popular at the university.

“She has more friends than I do!” Ascanio said. “I don’t think I could’ve been as successful here at FIU without her. I’ve excelled so much further than I thought I could.”

What’s next for both graduates? Well, FIU News said they are headed to Seattle where Ascanio will work as a manufacturing engineer on Boeing airplanes.