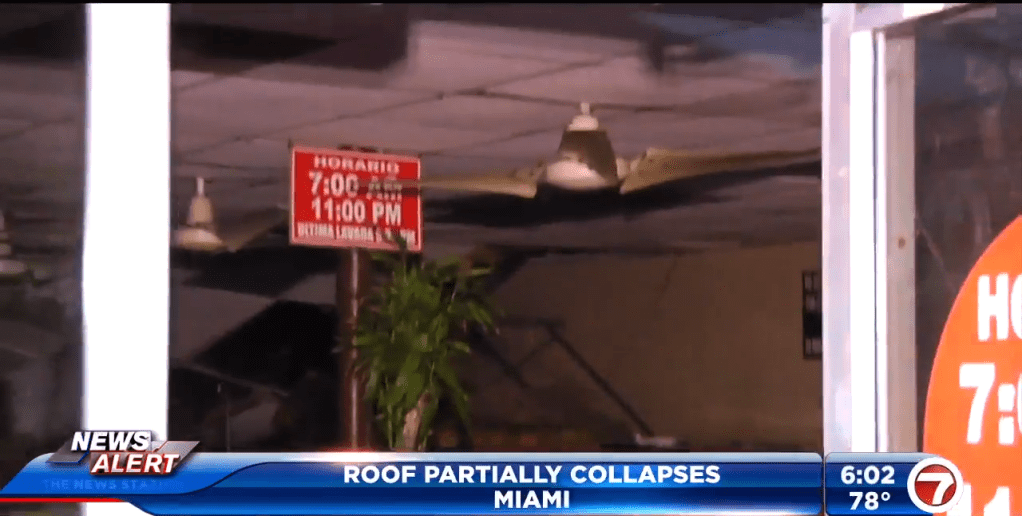 MIAMI (WSVN) - In addition to street flooding causing a soggy commute for drivers along Bay Shore Drive and boats being shoved onto rocks along the 79th Street Causeway, the roof at a strip mall partially collapsed after heavy rainfall wreaked havoc in Miami.

Footage showed the inside of the building with the back corner of the roof caved in.

The entirety of the laundromat’s floor was left covered in water.

“We noticed right away the roof had collapsed,” said business owner Elicer Gallardo.

7 SkyForce captured more video of damage to the roof from above.

Fire officials said police received a call of a burglar alarm that was set off. They then alerted the owners.

“They’re the ones that advised me that it was a problem, and I thought it was a burglary when I first heard it, but it wasn’t. It was worse than that,” Elicer said.

Once officers arrived, they realized the roof had already collapsed.

Elicer described what he witnessed when he arrived.

“A lot of water, about three inches of rain and as soon as I opened the door, the whole water started coming out. Um, I don’t know the extent of the damage, but uh, as far as the roof, it’s really bad,” said Elicer.

Engineers headed to the scene to investigate the integrity of the roof and determined the building unsafe.

The strip mall houses about eight businesses, including the coin laundromat and dry cleaners.

“I don’t know how long it will be before we open again, but it’s closed,” Elicer said.

Signs have now been posted on the building deeming it unsafe.