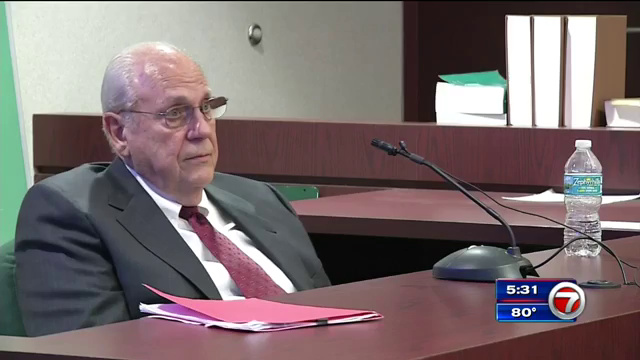 TAMPA, FLA. (WSVN) - A retired police officer took the stand on Wednesday to talking about the night he shot and killed a man during an altercation at a movie theater in Tampa.

When asked why he opened fire on 43-year-old Chad Oulson back in January 2014, 74-year-old Curtis Reeves said, “Well, at that point, it was his life or mine.”

Reeves testified at a “Stand Your Ground” hearing near Tampa, Tuesday.

Reeves and his lawyers believe he should be immune from criminal prosecution because, he said, he was acting in self defense. “I guess there’s a thing where you see somebody getting ready to set up to punch you,” he said.

Under “Stand Your Ground,” the law states that a person does not have to back away from a violent threat and can use deadly force if they fear the threat is potentially deadly.

Police say the confrontation started when Reeves asked Oulson, who was texting, to turn off his phone during the previews. Witnesses said it escalated when Oulson threw popcorn at Reeves.

Reeves testified that he thought he was in danger at the time. “He was getting ready to punch me, and I perceived that at some point, and that’s when the pistol came out,” he said.

When asked whether he wanted to shoot Oulson, Reeves replied, “Absolutely not.”

A Pinellas-Pasco Circuit Judge is overseeing the hearing. There is no jury in a “Stand Your Ground” hearing.

If the judge rules in Reeves’ favor, he will not face any charges for the shooting.