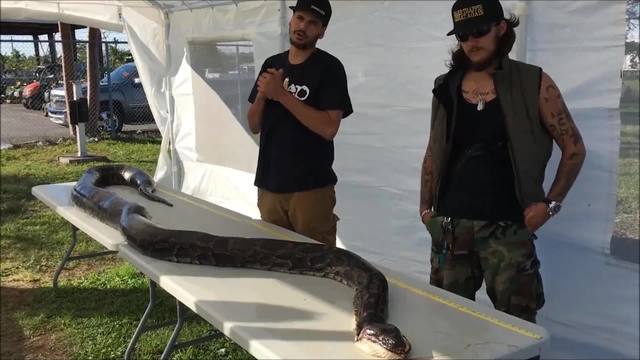 HOMESTEAD, FLA. (WSVN) - A python hunter in the Everglades made quite a killing after he snagged a 17-foot python, setting a new record.

The South Florida Water Management District tweeted video of the sizable snake on display at their Homestead Field Station.

The district said python hunter Jason Leon broke the record with his kill early Friday morning. The 17-foot, 1-inch python, weighing 132 pounds, is the longest ever brought in for the Python Elimination Program.

Python hunter Jason Leon set a record for the SFWMD Python Elimination Program with this 17-foot-1-inch Burmese python that he brought to the District's Homestead Field Station today. pic.twitter.com/p6iNnTex6H

Since the program began in March, more than 630 pythons have been removed from the Everglades.