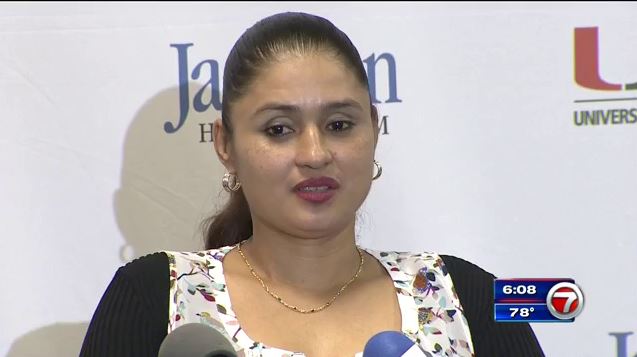 MIAMI (WSVN) - A pregnant South Florida woman who works in Wynwood has been infected with the Zika virus.

According to Jackson Memorial Hospital, Yessica Flores discovered she was seven weeks pregnant with her second child in June. All seemed well, so she took a trip to her native country of Honduras to spend time with her family.

She was aware of the CDC’s travel warning that was in place due to Zika, so she took all necessary precautions to protect her pregnancy, including staying indoors and avoiding mosquitoes.

Her pregnancy was going smoothly until Aug. 30, when she had a routine doctor’s appointment in Miami that included a screening for the Zika virus. “They called me to ask if I left the country and how did I feel, and I said, ‘I’m fine,'” she said through a translator.

The test was recommended to her due to her travel history and because she works in Wynwood, an area that had been declared Miami-Dade County’s first Zika zone, a month earlier. “She has two locations of potential exposure in Honduras and in Miami-Dade, but there isn’t a way, from a testing perspective, to know if an asymptomatic patient had the infection in Honduras or here,” said UHealth OBGYN Dr. Christine Curry. “For all intents and purposes, we don’t know the location of the infection.”

Two weeks after the test, Flores, who was then 16 weeks pregnant, received the news that she had been infected with the Zika virus. “She told me my results came out positive,” Flores said through a translator. “When she told me, I felt something strong, and I asked the Lord, ‘help me.'”

Since her diagnosis, Flores has been under the care of the Zika Response Team, a multidisciplinary group of UHealth – University of Miami Health System doctors at Jackson Memorial Hospital, who have been monitoring her pregnancy with frequent ultrasounds, regular screenings and checkups.

As of her last ultrasound, her baby’s head is developing normally. However, they will continue to monitor the fetal development in utero. “Our goal is to be able to detect anything early on in order for us to do intervention early on and have a better outcome for the baby,” said Ivan Gonzalez, a doctor with UHealth Pediatric Infectious Diseases. “As some of these babies may come out having nothing at all, we want to make sure that stays true for the next two to three years.”

Doctors said they won’t know if the baby is in the clear until after delivery.