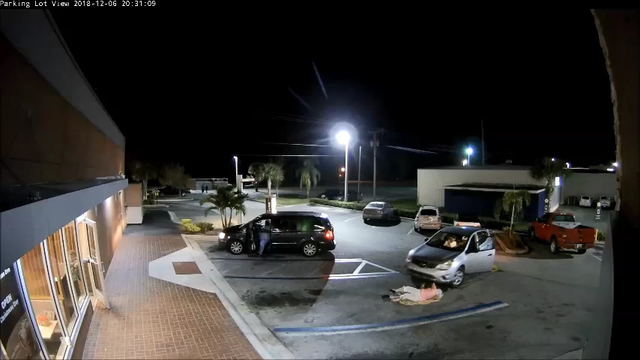 OKEECHOBEE, Fla. (WSVN) — Police have arrested a man accused of stealing a woman’s purse in a McDonald’s, then running her over with his car when she tried to stop him.

Okeechobee Police said the 76-year-old victim was eating inside the restaurant Saturday when the suspect, identified as 50-year-old Charles Alton Stratton Jr. approached her table.

According to police, Stratton pulled up to the restaurant and parked next to a side door. He then entered from the front door and walked up behind the woman, leaning behind her to grab her purse.

Surveillance video shows Stratton then fleeing through the side door to make his getaway, Fox 13 reports.

The victim ran after him and opened the driver side door. The suspect put the car in reverse and knocked the woman to the ground, appearing to run over her leg.

Okeechobee Police said the victim suffered a concussion and possible brain bleed from the incident.

Officers posted the security camera footage to Facebook but said Stratton soon turned himself in at the Volusia County Sheriff’s Office.

Stratton said his passenger, identified as Christina Stratton, emptied the purse, taking $4 from the wallet and throwing the rest of the bag out of the window.

The purse was later recovered by police.

Investigators said Stratton has been charged with robbery by sudden snatching, grand theft and aggravated battery with a vehicle.