Plantation firefighter wakes up to fire in his own apartment

PLANTATION, FLA. (WSVN) - An overnight fire forced a family in Plantation to evacuate their apartment. Thankfully, the family had their own firefighter to save the day.

The family of four was able to get out safely, thanks in part to their family firefighter. “The smoke alarm started going off,” said Plantation firefighter Henry Bernard. “I have two alarms in the house. One in the kitchen and one upstairs. Both alarms started going off.” 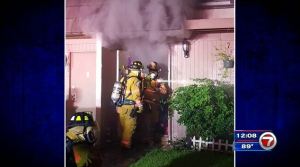 Thankfully, he and his family of three were not injured. Three cats were also saved from the apartment, with one needing to receive oxygen. “I just told them to go out. As soon as I saw the smoke in the house, I told them to get out before it got too overwhelming to get them out. They’re safe.”

The only casualties are some memories, but their important possessions are safe.

Bernard said this case is a reminder of the importance of teaching children and families the basic rules of fire safety, just in case you encounter a fire in your own home. “My 10-year-old goes to the fire stations with me,” said Bernard. “He knows, ‘Get out and go.'”

“My dad woke me up, and so he told me, ‘Go downstairs, go downstairs and get out the door,'” said Henry Bernard, Jr., “and I looked back in the kitchen, and I just saw a big puff of smoke.”

“My 5-year-old was a little reluctant to leave, but she got scared,” Bernard said with a smile.

The firefighter’s advice? Get a smoke detector. “Smoke detectors, one hundred percent, save lives,” he said. “Have as many as you can in your house at one time. They work.”

Officials believe this is an electrical fire that may have started in the water heater.

Now, the Bernard family needs your help to cover the expenses needed to repair their apartment. If you’d like to donate, click here.