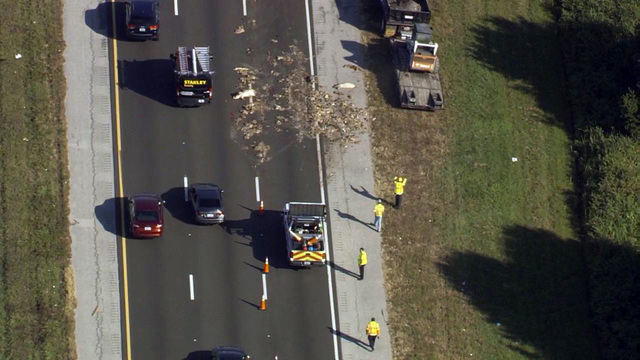 SARASOTA, Fla. (AP) — Police say the carcasses of what appeared to be several dead hogs tumbled off a truck in one Florida city, snarling two lanes of a busy interstate during the morning rush hour until the mess could be cleaned up.

Authorities say drivers backed up six miles on a stretch of Interstate 75 in Sarasota after the stinking animal remains scattered over two of the three northbound lanes.

Lt. Gregory Bueno of the Florida Highway Patrol said Wednesday that the two affected lanes were closed nearly two hours while emergency crews mopped up. He said by phone: “We had a mess, basically. The smell was very strong.”

Troopers told Fox 13 the roadway needed to be hosed off because the smell of the rotting meat was so terrible.

Police are now seeking the truck driver, who didn’t stop.