Officer Jonathan Aledda fired three shots in the direction of Charles Kinsey, a behavioral therapist who was in the street with 27-year-old Arnaldo Soto, a resident who left his care facility with a silver toy truck in hand.

A witness recorded cellphone video of the scene as Kinsey laid on his back and had his hands in the air. 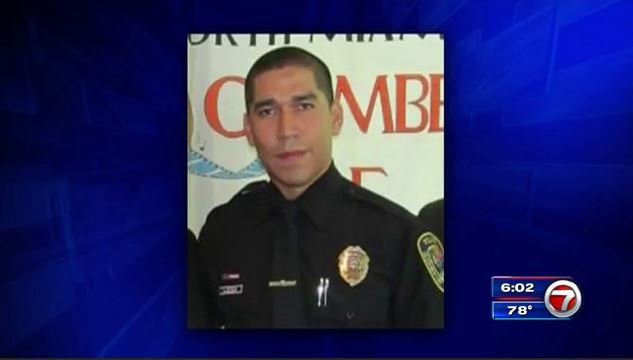 Calls to 911 reported a possibly suicidal man with a silver weapon, which led North Miami Police officers to respond to the scene. Although Kinsey had his arms up to show he was not armed, the Miami-Dade State Attorney said Aledda shot Kinsey.

Aledda now faces one count of attempted manslaughter, a third-degree felony, as well as culpable negligence, a misdemeanor.

The Miami-Dade Police Union is now speaking out. “He made a split-second decision in an intense, unfolding and dynamic situation like all officers are called upon to make,” said Luis Fuste, secretary of the Police Benevolent Association. “It took the State Attorney’s Office nine months, so I think second guessing an officer, it’s just wrong.”

According to the State Attorney’s Office, Aledda was not in the position to correctly assess the situation from 150 feet away or to fire his weapon accurately.

Kinsey has since filed suit. The lawsuit said officers responding to the scene grabbed their rifles and approached in “military style formation.”

The family of the autistic man have said they are mortified by how the police department  handled the entire incident.

“So often when things like this happen, there is no official justice,” said Soto’s attorney, Matthew Dietz. “The authorities don’t press charges on these officers, especially when it comes to persons with disabilities.”

“The family feels that they’re finally gonna get justice,” Dietz added. “He wakes up in the middle of the night screaming, ‘Police, police, the blood, the blood.”

Kinsey spoke to 7News from his hospital bed after the shooting and said that he tried to plead with officers to back down so he could calm his patient. On the police radio, however, there was confusion over whether his patient was loading a weapon.

“I got my hands in the air and said, ‘You know, I just got shot,'” Kinsey said from his hospital bed, soon after the shooting, “and I’m standing there saying, ‘Sir, why did you shoot me?’ And his words to me, he said, ‘I don’t know.'”

Kinsey has not commented on Aledda’s charges.

“His intended target was the actual individual who he thought was armed with a weapon,” Fuste said. “It turns out that it wasn’t a weapon, but Officer Aledda wasn’t aware of that. He felt that this individual posed a threat to the caretaker.”

The North Miami Police Department is not commenting, at this time.

The facility that was caring for Soto at the time of the shooting released a statement that read in part, “We are satisfied with the proper due process undertaken by the North Miami Police Department and the State Attorney. We thank them for their efforts and effectively recognizing the severity of this situation.”

Aledda is reportedly on administrative leave with pay. He has also since bonded out of jail.

Commander Emile Hollant was also placed on paid administrative leave, and although he doesn’t face charges, he is the subject of an internal investigation.

City officials said they have since put officers through crisis intervention training.

“So they know how to physically see and, perhaps, prevent a situation that happened like the one that happened last July,” North Miami City Manager Larry Spring said.