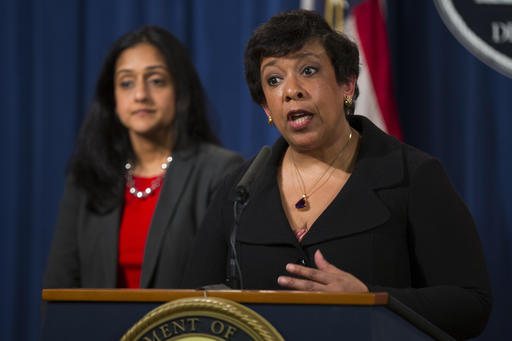 Lynch told The Associated Press in an interview that no one yet has “found the magic bullet” to prevent individuals from being inspired to violence by jihadist propaganda they read on the Internet.

Her visit to Orlando included what she described as a “very difficult meeting” with victims’ relatives, briefings with law enforcement officials and visits with first responders.

As officials investigate the June 12 attack at the Pulse nightclub, Lynch said there’s no doubt that Omar Mateen had read and been interested in extremist propaganda. In a 911 call made from the club, he also pledged solidarity with the Islamic State.

But she said investigators haven’t ruled out the possibility of other motives for the carnage, and they don’t yet know for sure why he targeted a gay nightclub for the shooting, in which 49 people were killed and dozens more wounded. Mateen died in a gunbattle with police.

“This was clearly an act of terror and an act of hate,” she told reporters later.

She called the rampage a “shattering attack, on our nation, on our people and on our most fundamental ideals.”

Lynch also directly addressed the LGBT community, saying, “We stand with you to say that the good in the world far outweighs the evil … and that our most effective response to terror and hatred is compassion, unity and love.”

Her remarks at a news conference followed briefings by U.S. Attorney Lee Bentley and other law enforcement officials, including prosecutors assigned to the investigation.

“I think there’s a real benefit to having her here to see everything firsthand,” Bentley said as the two stood with their arms around each other.

Lynch said the Justice Department will provide Florida $1 million in emergency funds to help with response costs. Florida’s Republican Gov. Rick Scott had earlier complained that Washington had turned down his request for $5 million to help pay for the state’s response.

Federal Emergency Management Agency spokesman Rafael Lemaitre said its disaster fund is not an “appropriate source” to pay for law enforcement response, medical care and counseling for victims resulting from a shooting.

More clues emerged about the attack Monday when the FBI released a partial transcript of phone calls Mateen had with a 911 operator and police crisis negotiators once the shooting got underway.

In them, he identified himself as an Islamic soldier, demanded that the U.S. “stop bombing” Syria and Iraq, warned of future violence in the coming days and at one point pledged allegiance to Abu Bakr al-Baghdadi, the leader of the Islamic State group, the FBI said.

Despite his declarations, the FBI says it’s found no evidence the attack was directed by a foreign terrorist organization. Mateen instead appears to have become radicalized through reading online jihadist propaganda, an influence that openly worries law enforcement officials.

Mateen’s calls to police, which one FBI official said were made in a “chilling, calm and deliberate manner” were similar to postings he apparently made to Facebook around the time of the shooting.

“I’m in Orlando and I did the shootings,” Mateen said in one call that came more than a half-hour after shots rang out, the FBI said.

Shortly after the call with a 911 operator, Mateen had three conversations with crisis negotiators in which he identified himself as an Islamic soldier and told a negotiator to tell America to stop bombing Syria and Iraq. He said that was why he was “out here right now,” according to the excerpt.

The shooting has fostered discussion about U.S. government efforts to identify and thwart individuals bent on violence — Mateen had been interviewed by the FBI three times since 2013 as part of two separate investigations and placed on a terror watch list — but also about whether stiffer gun control laws are needed.

The Senate on Monday rejected proposals from both parties to keep extremists from acquiring guns, including one that was publicly supported by the Justice Department.

Lynch has said federal investigators are still uncertain as to what drove Mateen to violence and to what extent he may also have been motivated by anti-gay hatred.

Investigators have done hundreds of interviews, including with family members, and are working in particular to determine how much knowledge his wife had of the plot.

Lynch’s meeting with first responders comes as Orlando police face continued questions about the response to the rampage.

On Monday, police Chief John Mina said that if any fire from responding officers hit victims at the club, Mateen bears the responsibility. “Those killings are on the suspect, on the suspect alone in my mind,” he said.