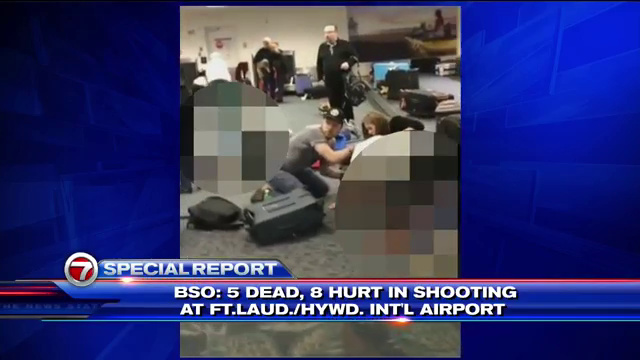 FLL officials said the shooting took place in the lower level baggage claim area, in Terminal 2, at around 12:55 p.m., Friday.

During a press conference, Broward Sheriff Scott Israel confirmed the fatalities. “The active shooter shot at least 13 people. Eight people, as I know, are in area hospitals being treated. Five people have succumbed to wounds and are dead,” he said.

In a press conference Saturday, Israel later corrected earlier reports and stated that six people were injured. As of 10:30 a.m. Saturday, three are in good condition, while three are in the intensive care unit.

Late in the evening, Broward Sheriff Fire Rescue confirmed 37 patients in total were transported to area hospitals. Beyond those suffering gunshot wounds, officials said four other patients were transported with minor trauma injuries, and the rest were taken for medical complaints like twisted ankles, chest pains and heat-related issues.

Florida Sen. Bill Nelson was he first to identify the subject during a televised interview, noting Santiago was carrying a military ID at the time of his arrest.

The suspect’s brother, Bryan Santiago, told the Associated Press that his brother had been receiving psychological treatment while living in Alaska.

Officials said Santiago had a gun inside of his checked bag. Once he opened his suitcase at the lower level baggage claim area, in Terminal 2, he started firing shots.

“He must have been between baggage claim [areas] 1 and 2, firing into everybody that was at baggage claim 3,” passenger John Schlicher told Fox News.

Witnesses said Santiago unloaded his clip, reloaded and then began firing again. “He’s shooting a 9-millimeter, about an eight-round mag, and he was as calm as can be,” said witness Mark Lea. “He was just walking like nothing was going on, not a peep.”

“All of a sudden, we heard ‘pop, pop, pop,'” said witness Debra Fugleberd, “and then the crowd of people came running around from the corner.”

Panicked travelers ran for cover inside the terminal, and on the runway, people caught in the crossfire sprinted outside.

“I remember saying, ‘Now I know what a stampede is like,'” said witness Montgomery Byers.

Meanwhile, good Samaritans were seen on their knees as they tried to render aid to those shot at the baggage claim area. The carpet was filled with pools of drying blood in some areas.

A witness saw what may have been a chase to apprehend the subject. “I arrived to Terminal 1 on Southwest,” he said. “Terminal 2 was already evacuated. We were minding our own business, then the shooting happened in our building … I saw a man run down the escalator with BSO in pursuit.”

A motive is unclear at this point. “The subject is currently being interviewed by the FBI … At this point, it looks like he acted alone,” said Israel. 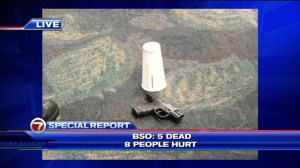 At 2 p.m., the FAA issued a ground stop for all flights at FLL. American Airlines, Southwest Airlines and United Airlines later confirmed they had suspended all FLL-bound flights for the remainder of the day.

FLL officials eventually reopened parts of the airport on Saturday, at 5 a.m.

Terminal 2 was expected to remain closed throughout the weekend, but late Saturday morning, Delta Airlines officials released a statement that reads in part, “Terminal 2, where Delta operates its FLL flights, remains closed to operating aircraft due to the ongoing investigation into Friday’s shooting in the baggage area. However, the TSA has been cleared to start limited screening of departure passengers and bags from Terminal 2.”

One man, who flew in to FLL from Ohio for a work retreat, shot cellphone video of the chaotic scene. He came to Broward Health because members of his team needed medication.

“It was crazy. It was stressful. There was a lot of running and pushing,” said the visitor. “We escaped out the back of the airport, under the fence, and there were cops and guns everywhere. I got into Terminal 1, and then the alarm went off, and there was massive panic. They shuttled everybody off under the runway.”

At around 2:35 p.m., TSA sent out a statement that there was an active shooter at FLL. Scores of police and law enforcement officials descended on an airport parking garage, located between Terminals 1 and 2, after reports of an unconfirmed second shooting.

Israel, however, said, “We have area Broward Sheriff’s Office SWAT teams clearing the entire airport. There’s no confirmation of any type of gunshots anywhere at the time of this horrific, horrific incident.”

Just after 3 p.m., civilians, including travelers with suitcases, migrated off of the airport property, walked around the railroad tracks and ended up underneath an overpass of Interstate 595.

“We were in a terminal waiting for a flight when we heard four to five shots,” said one unnamed witness. “It was total pandemonium.”

Authorities first cleared the terminal around gates D4 and D5, located at the north side of the airport. They also closed off the lower level, between terminals 2 and 3.

BSO officials told 7News they detonated a suspicious device they found underneath the airport’s new runway.

Meanwhile, according to Miami International Airport, extra security measures are in place there out of an abundance of caution.

Officials said at least seven flights that were headed to FLL were diverted to MIA. “We were all a little concerned about what was going to happen,” said Michael Hogan, a passenger on one of those diverted flights after landing at MIA.

At around 5:15 p.m., 7News cameras captured Florida Gov. Rick Scott beginning a news conference at FLL. “Whoever is responsible will be held accountable to the full extent of the law,” he said.

“My heart goes out to every family impacted,” Scott added.

Gov. Scott said he has reached out to President-elect Donald Trump and Vice President-elect Mike Pence but not President Barack Obama. However, speaking with reporters, later Friday night, he confirmed he also spoke with Obama.

According to FLL Director Mark Gale, they methodically checked every corner of the airport.

Broward County officials said Family Assistance Center has been established at the Renaissance Hotel, located at 1617 S.E. 17th St., in Fort Lauderdale, for stranded passengers who have nowhere else to go. The telephone number of the hotel is 954-626-1700.

Officials said many of the passengers were transported by bus to Terminal 4 of Port Everglades, where assistance was provided.

On Saturday, Scott directed the U.S. and State of Florida flags be flown at half-staff at all local and state buildings, installations, and grounds on Saturday and Sunday, from sunrise to sunset.