According to Hollywood Police, the accident took place near Stirling Road and North Park Road.

7News cameras captured one of the vehicles involved in the parking lot of a nearby Kwik Stop where, police said, two parked cars were also struck. 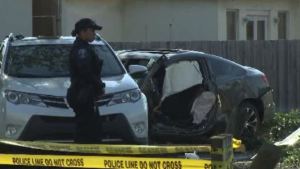 Paramedics transported occupants in both vehicles but did not specify how many people were riding at the time of the crash or how many sustained injuries.

Police temporarily shut down North Park Road in both directions while they investigated.