The PSA was issued in the form of a video. In what looks like a scene from a horror film, a knife-wielding clown is seen terrorizing defenseless victims in an isolated area.

“Get away. What are you doing?” a woman is heard saying.

Seconds later, the clown is seen staring directly at the camera. Just when he appears he is about to attack, the festively attired assailant takes his mask off to reveal Miami Police Officer Nick Perez.

The clip was posted in all of Miami Police’s social media pages, Thursday, and its message is crystal clear: Don’t do what they’re doing elsewhere or the joke could be on you.

The PSA is part of an effort by the department to get ahead of a twisted national trend. “Across the country, there’s been clown sightings where they’ve locked down schools and even some incidents where people have gotten hurt,” said Perez.

Due to the recent trend of #KillerClown pranks, we are releasing this video on how a prank can go wrong. pic.twitter.com/pGIeLcvbYj

In Detroit, for instance, a clown resembling the iconic Bozo was seen hanging from the back of a city bus.

Another clown, however, crossed the line in Livonia, Michigan. He was captured on surveillance video robbing a Days Inn, on Oct. 6.

The robbery led to a police chase. “He’s firing shots at the police,” said a police spokesperson. “He’s coming in to the holdups with his gun already drawn.”

A carjacking led to the arrest of a clown in a hoodie. The subject appeared to stay in character for his mugshot, which shows him breaking into an ear-to-ear grin. 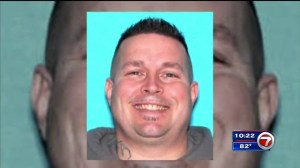 In Menasha, Wisconsin, a mother and father are facing child neglect charges after, authorities said, they left their young daughter at home to chase cars while dressed as clowns.

“The female and one of the males have a child together,” said Menasha Police Chief Tim Styka. “It was a 4-year-old child, and they had left this 4-year-old girl home alone while they decided to go out and do their clowning activities.”

The trend is not limited to the U.S. The silly stunts are now a nuisance across the pond.

British police have warned of what they call “killer clown pranks” around schools and parks. In one case, a chainsaw was said to have been used.

But back in Miami, Perez advised residents they better save the clown stunts for somewhere else. “First off, you could be arrested for these pranks,” he said. “Second, if somebody gets injured as a result of these pranks, you could be sued, so if you plan on doing these pranks, don’t. It might not end up as funny as you think.”