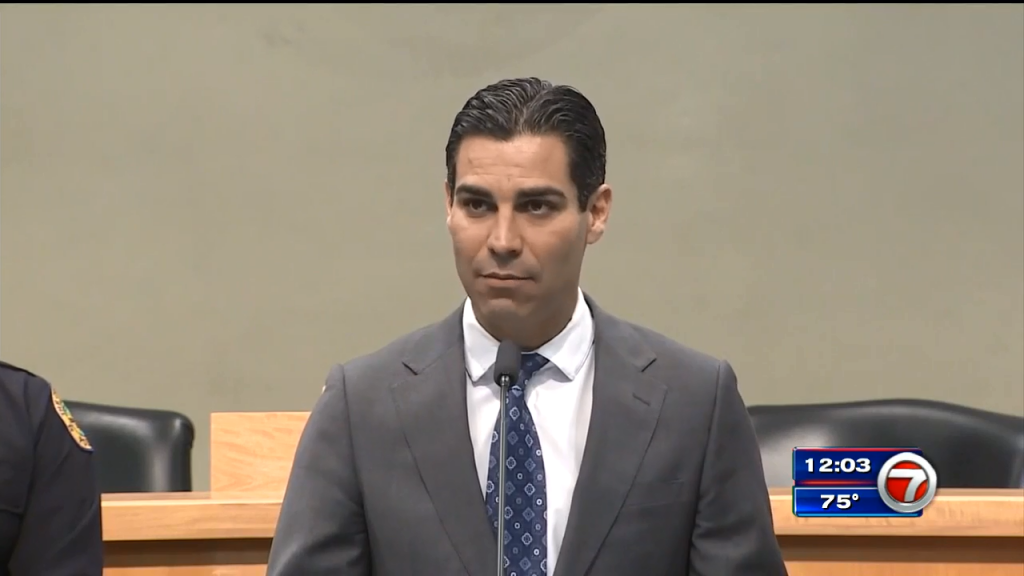 Suarez posted a video on Twitter to tell residents about the precautions he will be taking following the test results.

My message to our residents in light of the news that I have tested positive for COVID-19. pic.twitter.com/gW9IziifQm

Suarez has been self-quarantining after a recent meeting with other local leaders at Mar-a-Lago including U.S. Sen. Rick Scott, Miami-Dade Mayor Carlos Giménez in addition to world leaders, including President Donald Trump and Brazil’s President Jair Bolsonaro.

The Miami mayor on Thursday said he did not have any symptoms but isolated himself out of an abundance of caution.

When asked how he was feeling during a live interview with 7News, Suarez said via Skype, “I feel great. Obviously, very surprised and shocked to learn today that I tested positive for the coronavirus. I got a call from the Department of Health who asked me to come in and get tested. I went in, got tested. I didn’t feel any symptoms.”

The mayor also explained how he was notified that he had been exposed to the virus during the recent meeting with the Brazilian delegation.

“Yesterday, I was in a commission meeting, and it came to my attention that I was in a room, potentially a green room, on Monday, and maybe even on Tuesday, where this person was that had confirmed tested positive,” Suarez said. “We’re actually in a picture together that someone sent me where I was 4 or 5 feet away from him, so I decided to self-quarantine because of that.”

7News stopped by the Miami City Hall and found few of Suarez’s staff on site.

A staff member said the building was disinfected on Thursday, which led to some employees being irritated by the smell. Those staff members are said to be working remotely on Friday.

When asked what he was doing at home to keep his family safe as he goes through the self-isolation process, Suarez said, “It’s been tough for them, obviously. They have been quarantined in another place, and we’re working through that today. They have been tested, because they obviously came into close contact with me, and those results are pending.”

Suarez added that he has informed all of the city commissioners of his diagnosis, and he said that some of them have self-quarantined.

A spokesperson for the Miami-Dade Mayor’s Office said Giménez said he tested negative for the virus but will continue to self-quarantine.

Scott, meanwhile, has been advised he doesn’t need a test, but he will still continue to work from home.

“They said I don’t have to, but I want to make sure I don’t infect anybody,” he said.

Bolsonaro and the aide traveled to South Florida together to meet with the local leaders.

City of Miami Commissioner Joe Carollo, who is still waiting for his test results, said there are at least a few dozen city employees who had close contact with the mayor and have to self-isolate.