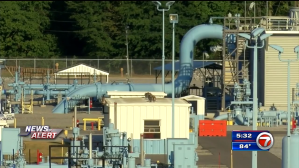 NORTHWEST MIAMI-DADE, FLA. (WSVN) - Police have arrested a 16-year-old girl after her alleged involvement in a hit-and-run crash in Northwest Miami-Dade that left a driver pinned under a tractor-trailer.

Miami-Dade Fire Rescue crews responded to the scene near Northwest 41st Street and 22nd Avenue at around 2:30 a.m., Friday.

Surveillance video outside a nearby building showed the moment the two vehicles involved in the crash collided.

One of the cars, a dark colored sedan, ended up wedged underneath a tractor-trailer, while the other driver fled the scene.

“We found one victim heavily entrapped under ride of a tractor-trailer,” said MDFR Capt. Kevin Attai.

Firefighters had to use the Jaws of Life to extricate the car’s driver.

“We had a little access issue initially,” said Attai. “We were able to gain access from the passenger side and remove him from the vehicle.”

MDFR rushed the man to an area hospital in serious condition.

Shortly after, officers pulled over a beige SUV in the area of Northwest 27th Avenue and 30th Street that had heavy front-end damage.

Police identified the driver as 16-year-old Diamond McCloud and arrested her at the scene.

McCloud has been charged with fleeing the scene of a crash with serious bodily injury.

The victim’s vehicle and McCloud’s vehicle were towed away from the area just before 7 a.m.

McCloud appeared before a judge, Friday afternoon. Officials said she has a prior record and will be held in juvenile detention. She is expected back in court Jan. 17.