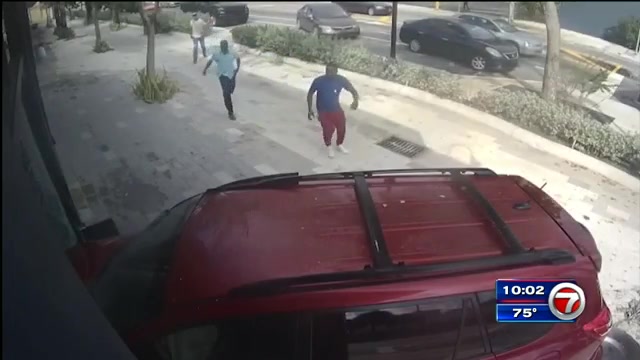 MIAMI (WSVN) - A driver is speaking out after, he said, a speeding SUV slammed into his car at a busy Miami intersection, then barreled into a gym.

Aldo Lomanto said the driver of a red SUV hit his silver SUV, hopped the curb and slammed into Primal Fit Miami, at around 3:30 p.m., Sunday.

“He hit me twice, and the car went inside the building,” he said.

Lomanto said the red SUV was traveling at a high rate of speed.

“I was coming through 82nd, so when I went to cross Second Avenue, I saw that the car was speeding,” he said.

City of Miami Police and Fire Rescue responded to the scene of the crash on the corner of Northeast 82nd Street and Second Avenue.

Witnesses described the crash as a close call that could have easily had a worse outcome.

“Had anyone been anywhere near this accident, someone most likely would have died,” said Thomas Conway, the building’s owner.

Monday afternoon, cameras captured customers returning to the gym less than 24 hours after the crash.

“Business as usual. I know people were hoping to have a day off from workouts, but no, we’re right back at it,” said Matt Pack, the gym’s owner.

Fortunately, Primal Fit Miami was closed at the time, so there was no one inside.

Surveillance video captured good Samaritans running toward the red SUV moments after the crash. Two men were seen prying the passenger side door open to allow the driver to get out.

In the video, the motorist appears to be OK, but paramedics transported him to North Shore Medical Center for treatment.

As for Lomanto, he walked away with just a scrape on the shin.

“We were literally seconds away from someone dying potentially,” said Conway. “It could have been a much worse situation, for sure.”

Conway and Pack said there were families walking along the area just minutes prior to the crash.

Conway said this isn’t the first time a car crashed into his building.

7News cameras were at the scene back in November when an SUV crashed into Nilaya, another business in the building, on Small Business Saturday.

Jennifer Dockendorf, the owner of Nilaya, said this was a case of another driver losing control.

“He turned, and he accelerated instead of braking,” she said.

Conway said he hopes his insurance will cover most of the damage this time, but it appears he’ll have to pay for at least some of it himself.

Pack said Conway is now planning on adding a barrier or railing along the sidewalk.

“So, if someone does comes this way, it’ll be hit and prevent this from happening again,” he said.

They have since cleaned up the mess left behind, boarded up the walls and opened up the gym once again on Monday.

“Thank goodness everything will be fine within a week and business as usual,” said Pack.

It remains unclear whether the driver of the red SUV will face any charges.