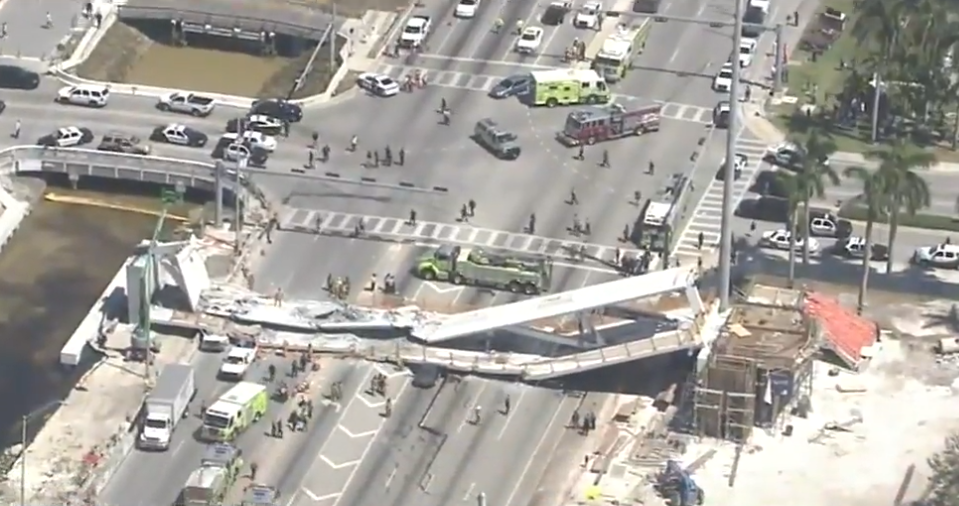 MIAMI (AP) — A pedestrian bridge that collapsed and killed six people while under construction near Florida International University had basic flaws that should have been caught before it was built, federal officials said Tuesday.

The National Transportation Safety Board also faulted the firms involved in the project and FIU for failing to act once extensive cracking appeared during construction of the pedestrian bridge. The agency said they should have halted work and shut down the road beneath it before the concrete span smashed eight cars on March 15, 2018. Ten other people were injured in the disaster.

The elevated walkway was uniquely designed to look like a cable-stayed bridge but was supported by trusses and made of concrete — not steel, as is common in such structures.

The board’s final report blames design firm FIGG Bridge Engineers Inc. and the company hired to conduct an independent review, Louis Berger, for not recognizing that a load on a key section of the bridge was underestimated.

Bruce Landsberg, NTSB’s vice chairman, said the checks and balances required by the Florida Department of Transportation, as the project’s supervising agency, “were completely lacking.”

“The bridge was not properly designed, and there was no qualified oversight on that design,” Landsberg said. “When the inevitable began to happen – a creeping, catastrophic material failure — nobody did anything.”

The NTSB said Louis Berger was mistakenly listed by FDOT in a website-generated report as a firm qualified to independently review a project of that complexity, even when it wasn’t.

It said Louis Berger failed to catch the design problems.

“That FDOT, which was supposed to review the plans, did not know, or think to ask, about their qualifications is more than just an oversight. It’s just plain sloppy,” Landsberg said in a statement included as part of the report.

The state agency said it was a technical error, adding that the design firm shouldn’t have simply relied on its website as proof of credentials.

The cracking of the concrete began three weeks before the bridge collapsed. It progressed, gradually worsening and appearing in new locations. Days before the collapse, the cracks were 40 times larger than what is commonly accepted.

Florida International University has maintained that it relied on professionals to notify the university of safety concerns.

The NTSB report says FIGG engineers failed to identify the significance of the cracking and did not obtain an independent peer review of the plan to address the cracking. The bridge collapsed immediately after crews tightened support rods in the northern section of the bridge.

In its recommendations, the NTSB says FDOT should require personnel to monitor and inspect bridge projects that have uncommon designs.

Neither FDOT, nor the firms FIGG nor Louis Berger immediately responded to requests for comment on the investigation’s conclusions.