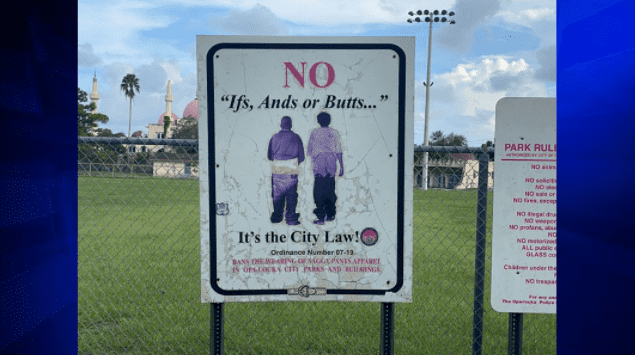 (CNN) — Officials in a South Florida city have voted to repeal a law banning low waistbands in public spaces as a step toward providing fairer policies to its citizens.

On Wednesday, Opa-Locka city commission members repealed saggy pants ordinances from 2007 and 2013 in a 4-1 vote, officials said in a statement Thursday.

The original 2007 city ordinance said that men could receive civil citations for wearing saggy pants with exposed underwear in city buildings and parks.

In 2013, the law was expanded to include women and public spaces, Vice Mayor Chris Davis told CNN.

“Since its inception, this law disproportionately affected certain segments of our population, including Black and brown men and women,” the city said in a statement. “The Commission agreed to repeal the law opting for a less aggressive approach of educating our constituents to encourage proper dress.”

Four of the five city commissioners sponsored the repeal. Davis, who proposed the repeal, said he never supported the law.

In the city commission’s virtual meeting on Wednesday, Davis said the law was originally created with the intent to encourage young individuals — specifically young Black males and males in general — to dress to certain standards in the community.

The lack of enforcement data and the city moving in a new direction of policing led him to sponsor a repeal, the vice mayor said in the video on Tuesday.

“You can’t pass a law to target any segment of a population. It has to be equitable,” Davis told CNN.

“In Opa-Locka, we’re a predominately African-American and Hispanic community. When you pass laws like that, they can seem predatory if not carefully implemented.”

As the country faces a climate of protest against police brutality, Davis said he believes the repeal of the city’s saggy pants law is an opportunity to implement the type of positive change needed to establish fair and impartial policies in the city.

The vote was a first reading of the repeal. The item will need to be approved again at the next commission meeting before it becomes official.