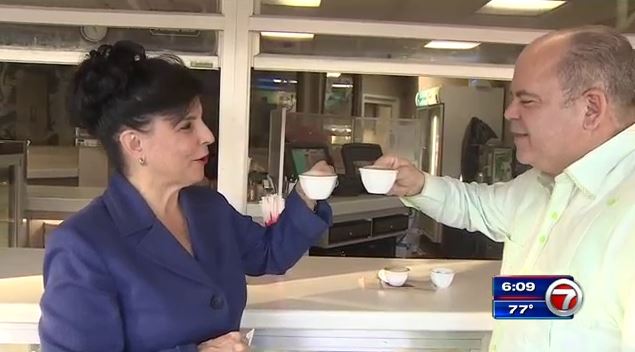 We walked around with pocket change and a knowing superiority that we could approach any of the countless Cuban coffee ventanitas in Miami and order a 4-ounce grail of that sweet, dark nectar of the Cuban gods.

For this meager sum, the window waitress gave us jet fuel in a tiny heatproof vessel we could take with us, securely, from the barber shop to the boardroom, and share with friends and frenemies. It was our birthright, our trophy, topped with a tiny tower of thimble-sized cups for sharing.

But those days have come quietly to an end.

The average price for a colada at 20 of Miami-Dade’s most popular ventanitas, from Homestead to Hialeah, is now $2.06 — twice what it cost at many Cuban coffee windows like Sergio’s Cuban restaurant in 2019. The cheapest among those, a tie between El Palacio de los Jugos on Flagler Street and Hialeah’s Epicentro, is now a $1.50. The highest? Hialeah’s Molina’s Ranch charges a Starbucksian $4.05.

“You’ll never see the colada for less than $2 in the near future. The dollar colada is over,” said Sergio’s owner CEO Carlos Gazitú, who last sold the dollar colada at his family-owned chain in 2019.

Miami’s current Cafecito Index registers High. But the end of the dollar colada is just the cafecito in the coal mine.

It’s the smallest indicator of widespread cost increases — from paper products to cooking oil — affecting the restaurants behind those ventanitas.

“The coffee isn’t the real money,” said Jesús Ovídez, 83, one of two remaining owners of Chico’s Restaurant on a recent afternoon.

“You want to know what’s real money?” he asks.

He unspools a CVS-length receipt from his pocket of purchases he made for the restaurant that morning. He stretches the receipt on the stainless-steel counter in the kitchen of his sweltering west Hialeah restaurant, tracing his finger down to the big-ticket purchases.

“What money could we possibly earn with everything going up this way?”

Still, Ovídez prides himself on serving what he calls the heartiest, least expensive breakfast in town at his restaurant of 42 years on Hialeah’s West 12th Avenue. A plate of two eggs (any style), white rice, fried sweet platanos maduros, cost $6.55. He laments he recently had to raise the price 50 cents; inflation, Ovídez says, is a tangible problem.

Yet every plate still comes with a side of buttery Cuban toast and the all-important first dose of Cuban coffee in a café con leche.

THE PRICE OF COFFEE

“A colada, at a dollar, you’re losing money,” Valls said.

Valls’ company imports beans and roasts its own coffee in Miami, using it not only at his restaurants — among them Versailles, La Carreta, La Palma and Casa Cuba — but selling it to grocery stores and restaurants, cafes and ventanitas throughout Miami.

His cost for the green, unroasted bean went up from $1 a pound to a high of $2.10 a pound last year, Valls said. The end result means the cost of roasted whole bean coffee might have gone up from $5 to $6.50 a bag.

Valls tries to insulate his business against price fluctuations by locking in a price with a coffee grower — most recently at $1.50 a pound — for six to eight months and storing unroasted beans in bulk. But even then, coffee producers have been reticent to lock in a price for longer than three months as the costs of labor and shipping fluctuate, thanks, in part, to rising fuel prices worldwide.

Part of that cost got built into your long-lost $1 colada.

EVEN THE TINY CUPS

The price of the paper cup Sergio’s uses for its colada (it switched from the less environmentally friendly Styrofoam) has gone up 30 percent since 2019, Gazitúa said.

An overloaded supply chain means manufacturers in China and Latin America are even streamlining production by cutting out custom branding, like Sergio’s logo and tagline, on the cups.

“We’ve never seen it so high,” Gazitúa said. “It comes to a point where the cups are more expensive than the coffee.”

The cafecito at the window has always been the “value play,” Gazitúa said, “a loss leader to get people in the door.”

“Everything’s gotten so stupid — that’s the only word I can think of. Prices are crazy,” Gazitúa said.

And those little plastic thimble cups? They cost Sergio’s 10 percent more than they did last year, Gazitúa said. The price of sharing the coffee experience has gone up for good.