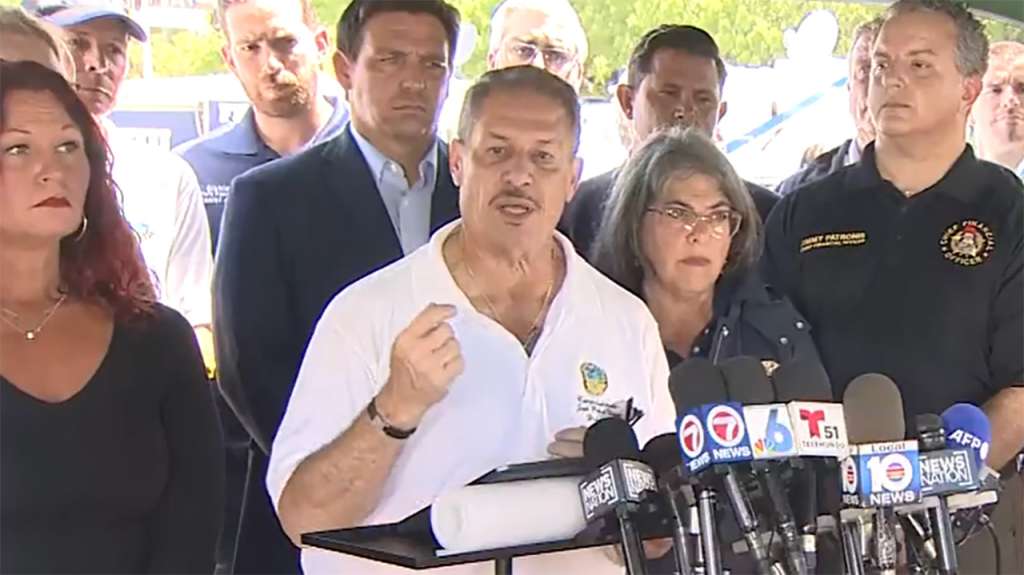 Diaz speaking at a press briefing on the Surfside condo collapse.

MIAMI (AP) — A vaccinated Miami-Dade county commissioner who helped other local officials in Surfside following the collapse of a condominium building announced that he and his chief of staff tested positive for COVID-19.

The news release late Sunday from Miami-Dade County Commission Chairman Jose “Pepe” Diaz said he and his chief of staff Isidoro Lopez, who also received a vaccine against COVID-19, came down with flu-like symptoms earlier in the day and later tested positive for the virus.

“Staff and others who have been in close contact with them will be getting tested between today and tomorrow,” the news release said. The statement also said Diaz and Lopez would be isolating and following guidelines from the Centers for Disease Control and Prevention.

Diaz had participated in news conferences and meetings with other officials in Surfside, the Miami Herald reported. Miami Dade spokesperson Rachel Johnson told the newspaper that COVID-19 tests would be administered at the Surfside command center on Monday.

The search for bodies continues at the wreckage of the Champlain Towers South in Surfside, where Monday morning, Miami-Dade County Mayor Daniella Levine Cava confirmed the death toll had reached 94 in last month’s collapse. Some 22 people remain listed as missing.

“Breakthrough” infections — fully vaccinated individuals who contract the coronavirus — do happen, although they are very rare. An Associated Press analysis of government data in May showed only about 1% of such cases resulted in hospitalization or death. The analysis suggested that nearly all COVID-19 deaths in the U.S. recently have been in people who weren’t vaccinated, a staggering demonstration of how effective the shots have been and an indication that deaths could approach zero if every eligible person gets the vaccine.