SOUTHWEST MIAMI-DADE, FLA. (WSVN) - Miami-Dade College’s Kendall Campus had to be evacuated after the campus received a bomb threat, according to the school’s website, Tuesday evening.

Classes were canceled for the evening as police investigated the threat but a search of the campus and surrounding areas that lasted several hours revealed no threat.

The school sent an emergency alert to students warning them to evacuate out of an abundance of caution. A school official told 7News that the school received a non-specific threat.

Below is a photo of the emergency email sent to students around 6:30 p.m. : 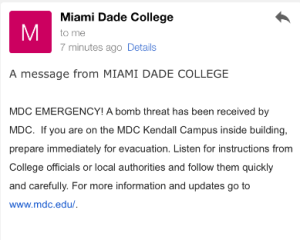 The investigation continues into the threat, and class resumed on schedule, Wednesday morning.